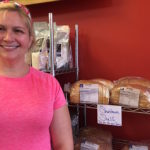 Sarah Burtch, the owner of Lawrence's Great Harvest Bread Co., 807 Vermont St., stands by the Shutdown Shelf of free bread on Friday, Jan. 11, 2019. The bakery is offering free bread to anyone affected by the partial shutdown of the federal government.

A “Shutdown Shelf” of free bread is available at a Lawrence bakery for federal workers and contractors who are going without paychecks as the partial government shutdown drags on — Saturday will be the shutdown’s 22nd day.

Sarah Burtch, the owner of Great Harvest Bread Company, 807 Vermont St., said she set up the shelf because she was feeling emotional reading about the struggles of federal employees on furlough or working without pay. One of her employees, Nick Spacek, said his former roommate worked as a government contractor in Overland Park.

“He hasn’t worked in three weeks and is really hurting,” Spacek told a reporter for the Journal-World who stopped in the bakery Friday morning.

Burtch and her staff decided on Thursday to offer the “Shutdown Shelf,” which was filled with free loaves of Italian herb, cinnamon, wheat and other breads. They put up a sign: “If you have been affected by the shutdown and are having trouble making ends meet, please take a loaf for free to help you and your family make it through.”

Not knowing how they would get the word out, they put the information on their Facebook page and word quickly spread. People have taken them up on the offer.

“We had a few in the last hour. I don’t want to draw attention to them,” Burtch said Friday morning. “They are very quiet and I think they are embarrassed. It’s not their fault. We want them to come in.”

What has amazed the staff is the number of people who have come in and left donations to help stock the “Shutdown Shelf.” They are also calling and messaging, asking how they can help. Burtch appreciates the monetary donations but also suggested that people donate to the local food pantry.

Meanwhile, Just Food, the Douglas County food pantry, has waived its poverty guidelines for federal workers who need a week of free groceries.

“Our policy is to err on the side of compassion,” said Elizabeth Keever, Just Food’s executive director. “No one should go without food during a difficult time.”

Those who are affected by the shutdown are dipping into savings, Keever said. Or they have little to no savings.

Keever said Just Food was bracing itself in the event the shutdown lasts through the end of the month; if it does, funding will run out for food stamps and the Women, Infants, and Children Nutrition Program, also known as WIC.