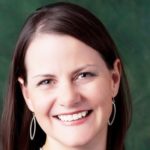 Megan Poindexter has been named as the new executive director of the Senior Resource Center for Douglas County.

The Senior Resource Center for Douglas County announced on Thursday that Megan Poindexter will join the agency as the executive director.

Poindexter has been executive director of Trinity In-Home Care for the last six years, according to a news release from the senior center. In that role, she managed operations of an agency serving seniors and people with disabilities who need nonmedical in-home and community support.

“We are thrilled to welcome Megan as our next Executive Director,” senior center board chair Janet Prestoy said in the release. “Her experience with nonprofit leadership in senior services, in addition to her close relationships with clients, stakeholders, partners, and others in our community, will be especially valuable as she leads SRC into its vital future. 2019 will be an exciting year for SRC under Megan’s leadership, with the planned move back to our renovated space at 745 Vermont and an expanded set of services for all seniors of Douglas County.”

Poindexter has a master’s degree in nonprofit management and is a member of numerous civic and industry groups dedicated to serving the senior population, according to the release.

“I am honored and excited to be part of the Senior Resource Center’s bright future,” Poindexter said in the release. “In my 13 years of living in Douglas County, I know how dedicated our community is to supporting the quality of life we all want for our family, friends, neighbors, and ourselves.”