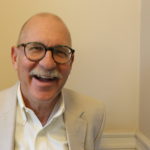 Craig Weinaug announced Thursday that he would retire Dec. 14 as Douglas County administrator after more than 26 years in the position.

“It’s time,” said Weinaug, who will be 67 in January. “The average length of time a city or county administrator or manager stays in one position is between six to eight years. I’ve served here longer than any Lawrence city manager, Lawrence school superintendent or Douglas County administrator in the history of Lawrence.”

Weinaug said there also are personal reasons that made this the right time to retire. He and his wife, SallyDon, are expecting the arrival of their fourth grandchild next week.

“I look forward to spending more time with my grandchildren,” he said. “I asked my wife if she was OK with me retiring. She said she was and said it in a way (that) I believe her.”

Weinaug was hired as the county’s second county administrator in June 1992, when he returned to his hometown after 14 years in municipal positions in Kansas, Texas, Oklahoma and Illinois.

Douglas County commissioners said Weinaug has been a dedicated public servant, committed to finding solutions to the county’s problems and improving the lives of its residents. Douglas County Commission Chair Nancy Thellman said Weinaug’s dedication and commitment were reflected in the culture he instilled throughout county government.

“Craig Weinaug is the quintessential public servant, and I count it as a privilege and a joy to have worked with him the past 10 years,” she said. “He’s a teacher at heart, too, patiently helping new commissioners learn the ropes of elected leadership, generously sharing his knowledge with citizens whenever they called with a question or complaint.”

Commissioners Mike Gaughan and Michelle Derusseau said Weinaug was an invaluable and patient resource during their early months as commissioners.

“He had to put up with me for almost a full year,” Derusseau said. “He took all my phone calls. Any question I had, I not only got the answer but the ‘why’ and the history. Sometimes you think ‘why can’t he just say yes or no?’ but that’s a good thing. There were many times I would be out talking to people and they would ask ‘why?’ or ‘how did it end up that way?’ and I was able to explain.”

One thing that sets Weinaug apart, Derusseau said, was his old-school personal touch.

“When everything is the internet or email, Craig would much rather pick up the phone and talk to people and answer their questions,” she said.

Commissioners said they hadn’t had time to think about the process of finding a new county administrator.

“That’s the kind of thing we would ask Craig for advice,” Derusseau said.

Weinaug said if asked, he would recommend the county undertake a nationwide search for a new administrator.

Gaughan, who will leave the commission when his term expires in January, said he would step away from any discussion of hiring the next administrator, leaving the task to Thellman, Derusseau and Patrick Kelly, who won the Democratic Party nomination for the 1st District Commission seat earlier this month and will be unopposed on the November general election ballot.

Thellman said decisions on a search for a new administrator would probably wait until Kelly joined the board in January and that Assistant County Administrator Sarah Plinsky would serve as interim administrator until someone was hired to fill the position.

“We have competent leadership and a staff fully capable of seeing us through because of what Craig has built,” Thellman said.

Plinsky was appointed assistant county administrator in December 2010. Her duties include involvement with the budget, employee policies and benefits, facilities capital planning, and serving on the committee developing plans for the behavioral health campus and expanded services. She served as acting county administrator for about four months after Weinaug suffered serious injuries from a bicycle accident in November 2016.

When asked if she had an interest in the administrator position, Plinsky said her focus was on her current job.

“We have a lot of conversations we have to get through the rest of the year,” she said. “I am dedicated to working with Douglas County.”

Weinaug said key accomplishments during his tenure were realized through the leadership of commissioners, the work of county staff and the cooperation of community partners. Among the joint efforts he is most proud of are:

• Merger and consolidation of the Lawrence Fire Department and Douglas County Ambulance Service, which allowed the ambulance service to grow from two to seven stations.

• An agreement with the city of Lawrence to merge emergency dispatch services.

• Creation of and continued support for the Lawrence-Douglas County Bioscience Authority.

• Development of the Lawrence Community Shelter.

• Enhanced funding for behavioral health, starting with the 2018 budget the County Commission has allocated.

Weinaug said he might still be able to add another item to that list if voters approve the referendum in November that will authorize collection of a quarter-cent sales tax to build a behavioral health campus and fund enhanced mental-health and substance-abuse treatment.

After reflecting on his career, Weinaug said he didn’t expect retirement to end his public service to the community he loves.

“I would welcome serving on the board of a nonprofit if I should be asked,” he said. “I will not darken the Courthouse with my presence once I leave. There’s nothing worse for a new administrator than a predecessor hanging around saying ‘this is how I would handle that.'”

Thellman said the county would have a ceremony recognizing Weinaug and his years of service to the county near his retirement date.