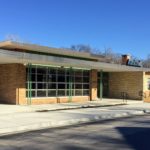 As the $2 million rehabilitation of the historic Santa Fe train station nears completion, city leaders will soon discuss other ways the building could serve the community now that it is owned by the city.

As part of its work session Tuesday, the Lawrence City Commission will discuss several options for secondary uses of the station, located at Seventh and New Jersey streets. Amtrak uses the station for its Southwest Chief route, and the lobby of the building needs to be available for passengers.

City staff is recommending that the building be available to rent for events and that the city simultaneously issue a request for potential public-private partnerships that are complementary to the city’s interest, according to a memo to the commission. In the case of a partnership, the city would continue to own the building but would lease a portion of it for private use.

The Amtrak train stops twice daily in Lawrence, at 11:49 p.m. and 5:09 a.m., and Assistant City Manager Diane Stoddard said that an example of a complementary use could be something like a coffee shop or other uses that would benefit the community and Amtrak passengers.

“It would be nice to have something that the passengers who are coming and going could take advantage of,” Stoddard said. She also said that a more active use of the building at other times of day would hopefully deter vandalism.

The memo notes that the historic Rock Island Depot in Liberal is home to the Chamber of Commerce offices and a restaurant. The Dodge City Santa Fe depot is an active Amtrak station, houses a theater company and is available to rent for events.

If the station were an event space, the Parks and Recreation Department would manage it, according to the memo. The department already manages other such spaces, such as the Union Pacific Depot and the Carnegie Building.

The Burlington Northern Santa Fe Railway owns the land the station sits on but donated the building to the city. The city and the railway have spent years finalizing the terms of the agreement. One issue that the city is still working to resolve is the railway’s right to lease a portion of the station.

Stoddard said the railway used the easternmost portion of the building as a crew station until a couple of years ago and that currently a condition of the real estate transfer is that the railway has the right to lease the space back with only a 10-day notification. The memo states that the city would need to have that provision changed or eliminated in order to move forward with most of the potential secondary uses for the station.

Stoddard said that the city has had some preliminary discussions with the railway about changes to the lease-back provision, and the city expects those discussions to continue.

“It’s probably not the highest thing on their priorities list, but they have indicated a willingness,” Stoddard said.

Another potential option noted by city staff is to use the building as a trailhead for the Lawrence Loop trail. One of the options for the completion of the loop would be to have the trail extend through the Santa Fe Station property, and as a trailhead the station’s parking lot and restrooms could serve loop users.

The city has also been approached about locating a local exhibit at the station. Specifically, Barbara Higgins-Dover wrote to the city about using the station to house the Kansas RiverKings Museum, which consists of five display cases, text panels, images and various artifacts. The museum tells the story of the early commercial fishing industry along the river, which was initiated in Lawrence in about 1870 by Jake Washington, who had escaped from slavery.

The 1950s-era train station is an example of midcentury modern architecture, and the station is now on the National Register of Historic Places. A Kansas Department of Transportation grant, which the city was awarded in 2013, funded 80 percent of the project’s cost.

Stoddard said the rehabilitation was expected to be complete later this month. A community rededication event for the station is scheduled for Feb. 22.