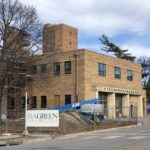 Delays and design changes have added hundreds of thousands of dollars to the rehabilitation costs of the downtown fire station and adjacent senior center, but the city estimates it will be able to offset some of the project’s costs with tax credits.

As part of its meeting Tuesday, the Lawrence City Commission will receive an update on the Fire Station No. 1 rehabilitation project and consider changes to the city’s funding agreement with Douglas County to accommodate the additional costs.

Fire Station No. 1 is a midcentury modern structure built in 1950 as the city’s public safety building. The Douglas County Senior Resource Center is housed in the eastern portion of the building, and the city and county previously agreed to jointly fund the cost of the project, which now totals more than $7 million, according to a city staff memo to the commission. The city estimates that about $1.4 million of the costs will be reimbursed by historic rehabilitation tax credits.

The memo states that the State Historic Preservation Office required several modifications to the original rehabilitation design, which added costs and delayed the project. A lawsuit filed by Topeka-based Champion Builders, which was resolved in the city’s favor, also delayed the project. The redesign and the delays, which increased material costs, added about $250,000 to the project, according to the memo. The commission previously approved those changes in July.

Since then, additional funds have been called for. The delays have also meant that an additional $57,000 has been added to the costs to temporarily house the senior center and fire and medical staff. About $216,000 of contingency has also been spent, and pending change order requests total about $85,000, according to the memo. Some of the items against contingency include $45,000 to repair the the sewer line under the building, $27,000 for steel framing for new poles and $30,000 to reinforce roof joints, among other items.

Assistant City Manager Diane Stoddard said the $85,000 of pending changes would come to the commission for review in the future and that Tuesday’s discussion was meant to update commissioners on where the project’s budget stands.

“We just wanted to give the commission a heads up as to where we were in the contingency funds in this budget, just so they know where those are,” Stoddard said. The project’s budget set aside $260,000 for contingency, and Stoddard explained that the $250,000 change order from July had previously been incorporated into the project’s budget.

While the city estimates it will be able to generate about $1.4 million in the sale of the historic tax credits, Stoddard said the amount would depend on the total amount of eligible expenses. She said the tax credits would be sold at the conclusion of the project.

As part of their Tuesday meeting, commissioners will receive the update on the project and consider changing the total costs of the funding agreement with the county from about $6.63 million to about $7.14 million. Under the agreement, Douglas County agreed to pay about 26 percent of the reconstruction of the fire station and 32 percent of the senior center.