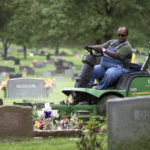 City landscaper Mike Brown carefully steers a lawnmower through the rows of headstones at Oak Hill Cemetery on Thursday, Aug. 30, 2018.

Fees at the city’s three cemeteries will see the first of five rate increases this year, funds that city officials say will help to better maintain the cemetery grounds.

The fee increase was approved as part of the city’s annual budget process and will increase rates for lots and burials by $50, excluding interment rates for infants, according to a city news release. The rates will increase by $50 each year through 2023. A more expensive nonresident lot space was also added.

The Lawrence Parks and Recreation Department oversees three cemeteries: Oak Hill, Maple Grove and Memorial Park. Parks and Rec Director Derek Rogers said that cemetery fees had not increased since 2012 and that a cost analysis indicated that Lawrence’s rates were in the low to midrange when compared with those charged by other cities.

“We have done quite a bit trying to improve the cemeteries, and we just have to put some more money and resources into doing that,” Rogers said.

Cemetery Supervisor Mitch Young said that improvements to the cemetery grounds would begin this year in section one. Young said the city already extended water lines to serve that area and would be installing sod and pruning overgrown bushes to improve appearance.

The new nonresident lot fee is $1,350, or about 50 percent more than the resident lot fee of $900. Rogers said the lower lot fee would be available for Douglas County residents and those with family members already interred in the city cemeteries.

Regarding the reason for the new nonresident rate, Rogers said that because the lot fees were relatively inexpensive, especially compared with private cemeteries, the city has seen some burials with no ties to the community. He said the city wanted to save the city cemeteries for community members.

The 2019 cemetery rates are as follows:

Rogers said the evening and weekend rates are more expensive owing to the need to pay staff overtime for work after hours or on weekends.