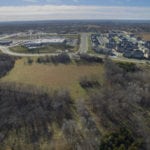 Undeveloped land owned by the City of Lawrence, at 5100 Overland Drive, is seen from the north, looking south, Tuesday, Dec. 5, 2017. The city has recommended the site, just north of the Walmart location at Sixth Street and Wakarusa Drive, as a location for a new $17 million police headquarters facility.

City leaders have taken a key step in the construction of the Lawrence Police Department’s new $18.5 million headquarters — hiring a firm to oversee the project.

The Lawrence City Commission recently approved a construction management agreement with Turner Construction, under which the firm will be paid $35,000 for preconstruction services and 2.45 percent of the project’s cost, according to a city staff memo to the commission.

The exact cost of the project has not yet been established, but the city has set aside $1.5 million for design and professional services for the police headquarters and $17 million for construction of phase one of the building. If the total cost of construction were $17 million, Turner Construction would be paid $416,500, plus the $35,000 for preconstruction work, for a total of $451,500.

Construction is expected to begin later this year.

Ten companies submitted construction management proposals to the city. A five-member selection committee of city staff reviewed the proposals and scored each based on seven factors, including cost, methodology, risk assessment, value assessment and past performance surveys, according to a summary of the selection process provided to the commission. Turner Construction was the firm with the highest overall score.

Municipal Services and Operations Assistant Director Melinda Harger, who was a member of the selection committee, said that the process began with a blind review of the proposals. She said five of the companies were selected for subsequent interviews, and that Turner Construction stood out in all parts of the review.

“Their expertise was very clear in both their written proposal as well in the interviews,” Harger said.

The memo notes that Turner Construction has built numerous police facilities in the Kansas City area. Those include the Olathe police headquarters, the Gardner Justice Center and the Kansas City, Mo., North Patrol Police Station.

Turner has experience with projects that use a construction manager at risk process, the memo states.

As construction manager, Turner Construction’s duties will include constructability reviews and cost estimates during preconstruction. It will also help develop the guaranteed maximum price for the project, which must later be approved by the City Commission, according to a city staff memo. Once construction starts, Turner will be responsible for administration and supervision, including inspection, equipment, labor, tools, materials, and overhead to complete the work of the project.

Turner Construction joins designers previously hired by the city for the project. In August, the commission approved a $1.35 million design contract with Leawood firm Hoefer Wysocki. As part of the contract, Hoefer Wysocki will create a master plan for the new police department campus, which will be built on undeveloped land owned by the city near Sixth Street and Wakarusa Drive. It will also include a city park.

Design of the headquarters is underway and the proposed site plan will be presented to the public at a community meeting in February before being brought to the commission for approval in April, according to the memo. It’s estimated that construction will begin in May or June and be complete by August 2020.