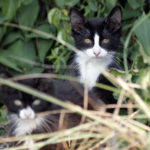 In this file photo from Aug. 3, 2007, feral cats gather for a meal provided by volunteers at Douglas Memorial Park in Cape May, N.J. (AP Photo/David Gard)

The Lawrence Humane Society proposed changes to the city’s animal control ordinance that would allow for a “trap-neuter-release,” or TNR, program under which cats would be caught, neutered, vaccinated, and then returned to where they were collected and allowed to roam free. As part of its meeting Tuesday, the Lawrence City Commission received further information about how the Humane Society would help support the program and voted in favor of adopting the ordinance on first reading.

Assistant City Attorney Maria Garcia told the commission that the program would rely heavily on Lawrence residents to volunteer to trap cats, take them to a veterinarian to be neutered and vaccinated and then return them to where they were collected. Once neutered and vaccinated, the cats would have an ear clipped so they could be identified.

Once funding was secured, Scheibe said that the Humane Society would move into phase two, where it would offer TNR services as a community service on a complaint basis. The third and final phase would require better data tracking regarding the location of feral cat populations. As part of the final phase, Scheibe said that the shelter would work with the city to collect data on feral cat populations and target certain areas.

Animal control would still pick up stray cats on a complaint basis and bring them to the shelter, but Scheibe said if a cat was undersocialized and determined to be feral, the shelter would release the cat back to where it was collected once it was neutered and vaccinated.

Currently, Lawrence city code does not allow cats to roam free, and animal control officers address resident complaints and trap stray and feral cats, which are brought to the animal shelter. Scheibe previously told the Journal-World that the practices of euthanasia and adoption have not succeeded in reducing the number of strays brought in to the shelter and that a TNR program would lower the population of feral cats.

Most of the approximately 430 people who responded to a community survey that the city made available online said they supported a TNR program. However, various respondents voiced concerns the cats negatively affecting bird populations and private property. Some comments also said that it is not humane to leave cats outdoors, where they endure cold temperatures and predators such as coyotes and hawks.

The changes, which include other revisions to the city’s animal control ordinance, will come back to the commission for a second reading at an upcoming meeting.

• Dec. 11, 2018 — Discussions about catch and release of feral cat colonies to continue at City Hall