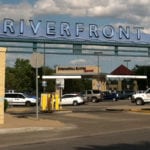 City of Lawrence services will be more concentrated on the northern edge of downtown by the end of this month.

Within a few weeks, the city’s Planning and Development Department and Municipal Court will open in their new location at the Riverfront Plaza, which is directly east of City Hall, 6 E. Sixth St. Renovations to the area of the building the city will use have been underway for months and are nearing completion.

The city paid about $763,000 to renovate the approximately 21,400-square-foot space, which amounts to about 40 percent more space than the current accommodations for the two departments.

In March, the commission voted unanimously to lease the western part of the building’s top floor for the Planning and Development Department and Municipal Court, which includes the city prosecutor’s office and the Human Relations office. The three-floor building was once the Riverfront Mall, and that portion of the building was most recently the customer service center for Midco.

The lease could also led to more permanent arrangements.

The city already owns the land the Riverfront building sits on, and the 10-year lease includes a right of first refusal for the purchase of the building. The building is owned by the Simons family, the former owners of the Journal-World.

When the commission was considering the lease, City Manager Tom Markus told commissioners that though City Hall is a good location, its space is limited. He said leasing part of the Riverfront building gives the city the chance to try out the building and identify any potential problems before city leaders consider whether to purchase it.

Under the Riverfront lease, the city will pay an average rate of about $275,000 per year over the 10-year lease agreement. The city currently pays about $187,000 annually to lease space to house the Municipal Court and the development division. The court is currently located in a building on New Hampshire Street and the development division is on the easternmost side of the Riverfront’s bottom floor.

The city’s planning and development divisions merged into one department in 2007, and department director Scott McCullough said in the release that housing both divisions together is the final step in having a truly merged department. He said the move will allow the department to consolidate resources and provide better service. Municipal Court Manager Vicki Stanwix said having the court closer to City Hall will provide an improved court experience.

Both Municipal Court and the Planning and Development Services Department will open in the new space on Feb. 25. The move will not interfere with city services and both functions will continue their regular hours, 8 a.m. to 5 p.m. Monday through Friday, according to the release.