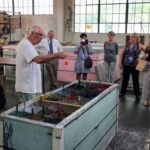 Though Jayhawks and Tar Heels aren’t typically thought of as allies, the cities of Lawrence and Chapel Hill, N.C., are teaming up this week.

A group of 80 people, including Chapel Hill elected officials, business owners, nonprofit directors and university officials, arrived in Lawrence on Sunday for a three-day visit during which they hope to learn from local leaders.

And so far, Chapel Hill leaders are finding the cities share common challenges, including questions regarding growth, affordable housing and downtown vitality.

Chapel Hill-Carrboro Chamber of Commerce Secretary Aaron Nelson said one of the common challenges that progressive university towns like Chapel Hill and Lawrence faced was resistance to growth and development. Nelson said residents and former university students tended to have a fixed idea of what their towns ought to be.

Every other year, the Chapel Hill-Carrboro Chamber of Commerce coordinates a visit and conference with another city to help business and community leaders learn from the experiences of another community, better understand community assets and build relationships to help address local challenges, according to its website.

Council Member Rachel Schaevitz said because the university was directly adjacent to the downtown that the student housing demand in downtown was a huge driver of the affordable housing crisis. She said redevelopment has been pushing out historically black neighborhoods that have a long history of being in that area.

Schaevitz said what they have learned is that affordable housing is a multifaceted problem that will take local subsidies, outside funding and partnerships to solve permanently.

“We have learned that the market will not provide it for us,” Schaevitz said.

Both Schaevitz and Nelson said that one thing that has stood out to them so far was the variety of businesses in Lawrence’s downtown. Schaevitz said downtown Lawrence had an “amazing diversity” of shops — she mentioned coffee shops, Brits, and Blade and Timber — and that she would like to see Chapel Hill have a downtown ecosystem that is as attractive to nonstudents as to students.

In addition to the shops themselves, Schaevitz said she noted the Lawrence Arts Center and the large amount of festivals and other events held downtown. She said those were lessons she would take back home. Nelson also noted the vitality of downtown and said he was impressed with the number of locally owned and operated businesses.

Chapel Hill visitors have meetings with city commissioners, City Manager Tom Markus and leaders from the University of Kansas, Haskell Indian Nations University and the Lawrence chamber of commerce. Nelson said the intercity visit program has been in place for 30 years. Over the last decade, Chapel Hill leaders have visited towns such as Ann Arbor, Mich; Asheville, N.C.; and Boulder, Colo., according to the chamber’s website.

Chapel Hill visitors will be in Lawrence through Tuesday.