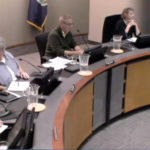 At their work session Tuesday, Lawrence city commissioners all said they are interested in reducing the city’s penalties for marijuana possession, which are currently more severe than what state law requires.

The city’s ordinance governing penalties for marijuana possession was adopted in 2006, and Vice Mayor Lisa Larsen said the commission’s discussion was overdue.

“This is a conversation I think we’ve been needing to have for several years, I believe,” Larsen said. “And as we’ve heard, public opinion has changed and we just need to do it and get it done and make the changes.”

Under state law, there is no minimum fine for first-time offenders convicted of marijuana possession and no mandatory drug evaluation. Under the city’s ordinance, first-time offenders pay a minimum fine of $200, plus court costs, and must also pay for and undergo a drug evaluation. Both city ordinance and state law set a maximum fine of $1000 and/or imprisonment up to 180 days.

More specifically, first-time offenders in Lawrence typically must pay the minimum $200 fine, $63 for court costs, $85 to $150 for a mandatory drug evaluation and additional costs if education or counseling is required. The person would also receive a 90-day suspended jail sentence, meaning the sentence isn’t served unless a subsequent violation occurs, and a six-month probation requiring court appearances monthly or every two months until all obligations are met, according to a presentation to the commission. Possession of drug paraphernalia, if applicable, would result in additional charges and fines. 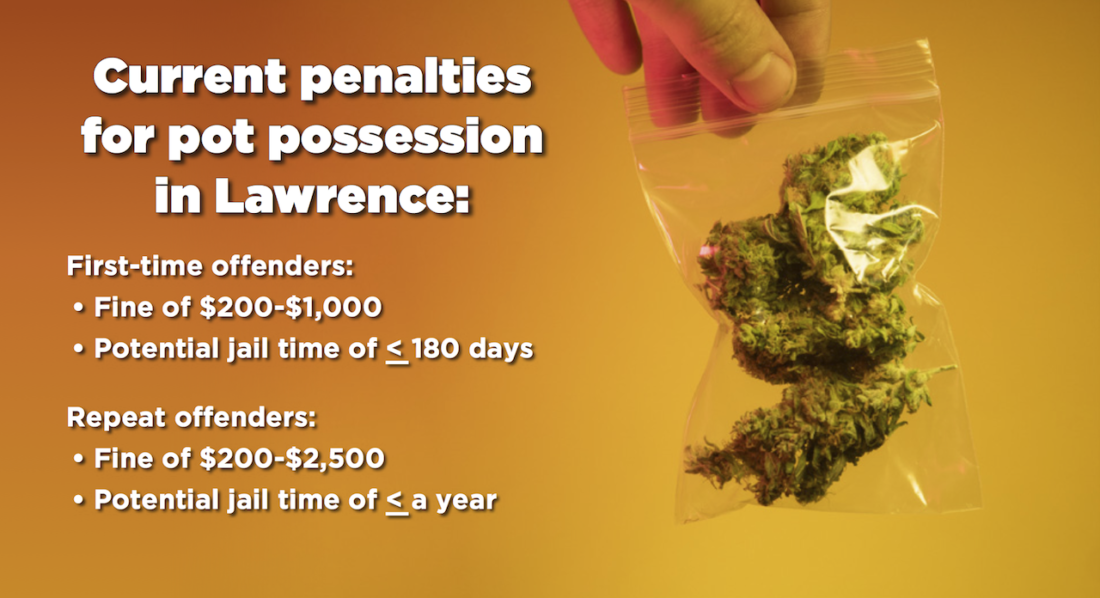 Commissioner Matthew Herbert said he thought the city reducing the penalties for marijuana would show that it is adjusting to the changing public opinion regarding marijuana use nationwide. He said he thinks such action is the best way to send a message to state legislators about what city leaders would like to see.

“I think by taking actual action on a municipal level, we do a little something more than just sending a legislative statement,” Herbert said. “We demonstrate to our state the actions that we hope to see done. And I for one would like to be part of that change.”

To receive a diversion for marijuana possession, an additional $100 is charged, making for a minimum cost of $448-$513 if there are no additional costs for education or counseling. One man who spoke during public comment said that he was on diversion for marijuana possession and that he was required to take drug education classes and ended up being charged approximately $700 in total.

In response to questions from the commission, City Prosecutor Elizabeth Hafoka said that the city’s diversion program typically charges $100 more than what the fine would have been for an offense. Commissioner Jennifer Ananda, an attorney and social worker, said she was concerned with that practice because people with higher incomes are more capable of paying for diversion and therefore can more easily walk away with a clean record.

“I think it’s a broader issue than just this specific ordinance, but I do have concerns with that,” Ananda said. “Looking at criminal history and how it impacts one’s future, and when you have money then you’re able to have less of an impact.”

Ananda asked whether Hafoka had statistics regarding the demographics of those charged with marijuana possession, and Hafoka said that she did not have that information.

“The magnitude of the penalty decreases as your resources go up,” Boley said. “It’s greatly magnified for people with very few resources and almost nothing for people with a lot of resources. So I think that’s something we have to worry about, is the disproportionate impact on our population.”

The commission took up the topic after Lawrence resident Laura Green asked the commission this summer to reduce the fine to $25 and remove the drug-abuse evaluation requirement. Green said the current penalties are financially burdensome and not in line with the shifting attitudes regarding marijuana.

Ultimately, commissioners agreed that they were interested in reducing the minimum fine, perhaps to $50, and doing away with the mandatory drug evaluation or making such an evaluation within a judge’s discretion but not required.