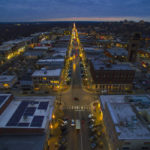 Though members of the Downtown Master Plan steering committee represent various groups and interests — neighborhoods, developers, small businesses — there was one issue that the majority of the group agreed on.

After identifying more than two dozen issues facing downtown Lawrence, 10 of the 17 steering committee members present at City Hall for the committee’s first meeting Thursday agreed that one of the top issues was balancing preservation and progress.

“Every single issue is this issue, no matter what it is,” said committee member Emily Peterson, co-owner of Merchants Pub & Plate and one of the committee’s downtown business representatives.

The steering committee will help create the city’s new Downtown Master Plan by providing input to the consultants. The new plan will replace guidelines that have not been updated in 20 years, and will cover various topics, including development, open space, transportation, infrastructure and streetscapes.

In August, the City of Lawrence hired a consulting firm, Houseal Lavigne Associates, to complete the Downtown Master Plan. As part of Thursday’s meeting, Houseal Lavigne principal Nik Davis asked the committee members to identify the issues and concerns they had about downtown Lawrence. The committee created a list of 25 issues, and Davis then asked each of the members to pick three issues from the list that they thought were the most important.

Davis said the key issue that the committee identified — balancing preservation and progress — is exactly what the new plan needs to do.

“That’s what our charge is,” Davis said. “We need to take all this feedback and find the right path forward.”

Some of the other 25 issues that got at least four votes included reconnecting downtown to the Kansas River; keeping property values and rental rates down; maintaining the historic downtown character; and promoting better interaction between downtown and the University of Kansas.

And committee member Matt Veatch, who is representing the Historic Resources Commission, said that the plan needs to strike a balance between residential density and maintaining the historic buildings and development pattern of downtown Lawrence.

Other issues noted included the lack of affordable housing; availability of diverse goods and services; addressing inappropriate downtown behavior, such as aggressive panhandling; and the availability, access and perception of parking.

The committee will hold three meetings total. It comprises 18 individuals appointed to represent neighborhood associations, downtown businesses, developers, historic preservation, affordable housing and other interests, according to the committee’s roster. There are also three at-large seats.

The general public will also have a chance to provide input on the plan. Davis said that Houseal Lavigne is beginning the process by identifying the issues that the community wants the plan to address. In addition to input from the committee, he said feedback would be gathered through online surveys, community meetings and stakeholder meetings with small groups.

Davis said the community meetings would likely start early next year, and that consultants would then provide a summary of the issues and concerns to the city. He said consultants would also prepare a market and demographics analysis and identify goals and objectives for downtown. He said that, ultimately, the plan, which would cover a period of 12 to 15 years, would recommend specific actions for the city to take.