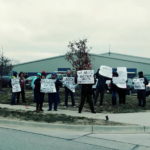 Public transit employees hold signs in front of the transit facility on Timberedge Road on Dec. 28, 2018.

Amid renegotiation of their contract, members of the local transit union are prepared to strike, raising the possibility that local bus service could come to a halt.

The city of Lawrence and the University of Kansas recently decided to hire a different company to operate their coordinated bus services. The City Commission voted in November to hire First Transit, which is set to replace longtime contractor MV Transportation on Jan. 1.

Amalgamated Transit Union Local 1754 President Justin Priest said that union members, at a meeting on Sunday, voted to strike. Priest explained that the vote doesn’t mean that drivers, mechanics and dispatchers won’t be showing up for their shifts, but the vote paves the way for a strike in the future if negotiations break down.

“If the negotiation part goes poorly, then we have the option,” Priest said. “We are giving ourselves the option.”

As the Journal-World recently reported, drivers will be paid more per hour with First Transit — a starting wage of $15. Under MV Transportation, drivers made about $12 per hour. However, Priest said other elements of the contract First Transit has proposed are worse for workers.

Specifically, Priest said that even though workers are paid more per hour, health care premiums also increased, and the annual deductible increased to $6,000. He said the increase in pay is not enough to cover those additional costs.

Priest also said that First Transit has proposed striking part of its proposal that allows workers to take bathroom breaks at any time, as well as another provision that allows them to work a second job.

A call to First Transit was not immediately returned Monday afternoon.

At the commission’s meeting in November, First Transit Regional Vice President Susan Spry told commissioners that First Transit’s proposal included the terms of the existing union contract and that she expected a smooth transition.

The commission approved a five-year contract with First Transit after considering proposals from it and MV Transportation, which has operated the city bus service since 2000. Though First Transit’s proposal was more expensive, a committee ranked First Transit higher in all other criteria.

For the five-year period, MV Transportation proposed $30.5 million and First Transit proposed $32.1 million, or about 5 percent more than MV, according to information the city provided to the Journal-World. The portion of the contract provided to the commission does not include stipulations about worker pay or other benefits.

Priest said that contract negotiations between the union and First Transit began Thursday, and that union members picketed outside the transit offices Friday morning from 8 to 10 a.m., forming an “information line” with signs. He said contract negotiations are ongoing and that the next negotiation meetings are tentatively scheduled for Jan. 10 and 11.