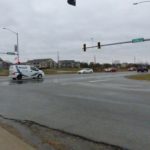 Three intersections on the western leg of the South Lawrence Trafficway have become so dangerous that they’ve produced 53 accidents in 20 months, Kansas Department of Transportation statistics show.

The portion of the South Lawrence Trafficway east of Iowa Street was completed in November 2016, marking the final piece of the bypass project. The eastern section is a four-lane divided highway, but the road changes to a traditional two-lane highway west of Iowa Street.

Since the eastern leg opened, traffic volumes on the long-completed western leg have doubled and accidents have soared, according to data provided to the Journal-World. For example, in the first 10 months of 2016, prior to the opening of the eastern leg, there were only a total of four accidents at the three intersections.

The latest KDOT report measures accidents at the three intersections from November 2016 to June 30, 2018. Accident totals during the time period are:

All three intersections are at-grade, and without overpasses or underpasses or long access and exit ramps that are standard on freeways. They are also on the busiest section of two-lane highway in the state, KDOT engineer Aaron Frits told the Douglas County Commission recently. KDOT traffic counts show daily vehicle numbers at the Kasold Drive intersection increased from 8,380 a day in 2016 to 18,400 a day this year.

A KDOT study of the rates and types of accidents during the 20-month period also provided guidance for the safety upgrades planned for the Wakarusa Drive and Farmer’s Turnpike intersections, said Laurie Arellano, KDOT spokeswoman.

To combat the high number of rear-end collisions on K-10 at the Wakarusa Drive intersection, KDOT plans to install signs with embedded flashing lights on the highway east and west of Wakarusa Drive, Arellano said. The flights will coordinate with the traffic signal at the intersection and alert drivers of a red light ahead. The flashing warning lights were chosen over rumble strips because they will give motorists a better understanding of what to expect as they approach the intersection, she said.

“The lights will flash a warning there is a red light ahead and alert them that cars are queueing up in front of them,” she said. “The goal is to reduce the number of rear-end crashes we’re experiencing at that intersection.”

The new warning lights will be operational no later than August 2019, Arellano said. KDOT engineers are now working on how far the lights will be set back from the intersection.

The at-grade K-10 entrance and exit lanes to Interstate 70 north and south of the Turnpike also were studied, but were found not to be a problem, Arellano said.

David Cronin, Lawrence city engineer, said KDOT worked with the city as it planned the Wakarusa and Kasold drive safety improvements. The city let KDOT take the lead because ultimately state engineers decide what improvements are made, he said.

The planned safety enhancements at Wakarusa Drive and Farmer’s Turnpike are interim improvements designed to make those intersections safer until the entire west leg is upgraded to a four-lane road, Arellano said.

It’s unclear when the four-lane upgrade will happen. KDOT started a three-year environmental impact study of the west-leg four lane upgrade in September. The study is a required step in the expansion of the highway and there will be no major upgrades to the K-10 west leg or its intersections during the study, Arellano said.

There is no funding for the K-10 west-leg upgrade, but it is one of the state’s emerging highway needs to be considered for the next state transportation plan, Arellano said.

On another front, a Joint Legislative Transportation Vision Task Force has conducted a series of public hearings across the state since August to prepare a report on what a new state transportation plan will include and how it should be funded. It will present its findings to the Kansas Legislature in January.

If the K-10 west leg is among the projects chosen for the next transportation plan, KDOT has said all elements of the improvements would be constructed as one project to control costs. That is at odds with Douglas County’s position that the badly needed Wakarusa Drive interchange be built as soon as possible after the completion of the environmental impact study, said Chad Voigt, deputy Douglas County Public Works director. Even if the K-10 project is slated for early construction in a new transportation plan, it could take a couple of years to get all the details in place for a project as complex as the K-10 west leg four-lane upgrade, he said.

KDOT will continue to monitor the number of accidents at the K-10/Wakarusa Drive intersection and make further changes if needed, Arellano said. But unlike the Kasold Drive closure, those changes wouldn’t include measures to restrict city traffic from accessing K-10.

“That would just put more traffic on city streets that aren’t designed to handle it,” she said. “That traffic is supposed to use K-10.”