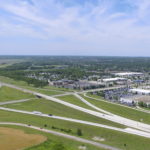 City leaders will consider adding three issues to their list of legislative priorities, including a statement opposed to making the South Lawrence Trafficway into a toll road.

As part of its meeting Tuesday, the Lawrence City Commission will consider approving its Lawrence Legislative Priority Statement, which it sends annually to the state legislative delegation. The proposed statement comprises 21 priorities, three of which are new additions: one against using tolls to fund the expansion of the SLT; one in favor of giving municipal court judges greater flexibility to consider defendants’ ability to pay when imposing penalties; and one against changing property valuation methods for commercial property.

In September, the Kansas Department of Transportation began a three-year environmental impact study for the expansion of the west leg of the trafficway from two to four lanes. Funding for the potential lane expansion has not yet been identified, and state officials are considering making the trafficway a toll road to help pay for the project.

A Joint Legislative Transportation Vision Task Force will make recommendations in January to the Kansas Legislature regarding what should be included in the state’s next transportation plan and how it should be funded. At a meeting of the task force last month, several Lawrence and Douglas County leaders expressed opposition to the idea of adding tolls to the trafficway, which allows motorists using Kansas Highway 10 to bypass Lawrence rather than use city streets.

Fines, fees and penalties in municipal courts: The Kansas Supreme Court appointed an ad hoc committee in 2017 to review bonding practices, fines and fees of Kansas’ municipal courts. The committee’s report, issued in September, made 18 recommendations. The city’s statement encourages the Legislature to take action on three of the recommendations, all of which attempt to make fines and penalties more equitable for defendants with lower incomes. Those include that judges should be authorized to modify mandatory minimum fines when there is sufficient evidence of a defendant’s inability to pay; that judges should be provided explicit legal authority to impose nonfinancial conditions on appearance bonds; and that judges should be able to determine whether a defendant’s driver’s license should be suspended rather than having it automatically suspended by law. The city’s priority states that losing the ability to drive can have dire consequences on a defendant’s ability to get to and from work and to handle other critical personal and family obligations.

Alternative property valuation: Some big-box retailers have challenged local appraisers’ methods of assessment for property tax valuations, pushing instead for a method known as “dark store theory.” The method uses the vacant lease value of a property rather than its current use to determine property value, potentially saving companies millions of dollars in taxes. The city’s priority states that commercial properties should be appraised at their highest and best use and that the city supports legislation requiring the Kansas Board of Tax Appeals to consider the three proven methods of valuation: cost minus depreciation, sales comparison and income, when determining a property’s true value.

The full list of proposed legislative priorities is available on the city’s website, lawrenceks.org, and includes support for restoration of funding for the arts, efforts to retain Amtrak passenger train service through Lawrence, and legislation and programs that encourage energy-efficiency improvements, among others.