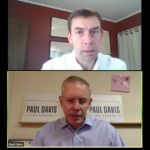 TOPEKA – Democratic congressional candidate Paul Davis is enlisting the help of a national Democratic organization to round up support for his campaign in the 2nd District of eastern Kansas.

Davis held what might be called an online “meet-and-greet” Wednesday that was hosted by Swing Left, an organization formed in 2016 in the wake of President Donald Trump’s election. The group is working in what it considers “swing” districts in hopes of electing a Democratic majority to the U.S. House in 2018 to serve as a check against the Trump administration.

And although Davis has been careful in the campaign not to identify himself as an “anti-Trump” candidate, he did challenge Trump on issues of trade tariffs and immigration during Wednesday’s online event.

“Right now, what President Trump is doing with the trade war that he has sparked with China and many of our allies, economic allies, has had a dramatic effect on Kansas farmers,” Davis said, noting that soybeans, the target of retaliatory tariffs by China, are the single largest crop grown in the 2nd District.

Davis also took the Trump administration to task over its proposal to build a wall along the U.S.-Mexico border.

“There’s no doubt we have far too many people that are coming across our border with Mexico,” Davis said. “But I’m not convinced a very large and expensive wall is the end-all, be-all solution to that.”

The online event was billed as an opportunity for Swing Left activists to meet Davis and ask questions. As a result, there were not the type of challenging questions that candidates might otherwise face in a public debate or media interview.

Watkins has said he supports building a border wall and enacting “strong but fair trade agreements that promote Kansas exports.”

Watkins emerged from a seven-person Republican primary in August with about 27 percent of the vote. Since then, he has been relatively quiet on the campaign trail, although he has received significant help from the Congressional Leadership Fund, a Republican super PAC, which is paying for third-party TV ads on his behalf.

Historically, the party that controls the White House has lost seats in midterm elections. But Democrats are especially hopeful this year because Trump’s approval ratings have been below 40 percent in major polls since late August.

The 2nd District is an open seat this year because incumbent Rep. Lynn Jenkins, a Republican, is retiring after five terms in office. Although the district leans Republican in voter registration, major political handicapping websites are calling the race a toss-up.

So far, no face-to-face debates have been scheduled in the 2nd District, although both candidates have said they are willing to debate each other.