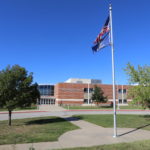 A Lawrence teenager was sentenced to six months of probation Friday morning after he was convicted in September for bringing a loaded handgun to Free State High School in his backpack last spring.

The 18-year-old was 17 when the incident occurred, and he was charged as a juvenile in Douglas County District Court.

Juvenile Court Judge Bethany Roberts said she chose six months, instead of the maximum 12 months, because he’s no longer a minor now and she wants to give him the opportunity to do better as an adult than he did as a juvenile.

“I have a lot of hope for what you can bring to this community,” she said to the teenager.

Additionally, the teenager could speed up the probation process by completing two of four suggested options, including completing a fatherhood course, completing a mentoring course, attending therapy or writing an apology letter to Free State High School.

Prior to the sentencing, Danielle Packer, the teenager’s attorney, suggested the fatherhood and mentoring courses that could be included in the sentence. The teenager recently became a father, according to statements made in court.

He entered a plea of no contest in September to one count of criminal use of a weapon, a nonperson misdemeanor. Under his plea agreement, a charge of marijuana possession from the same incident was dropped.

The morning of April 9, a school resource officer and another Lawrence police officer found the boy with a Kel-Tec PMR-30 .22 magnum pistol in his backpack, prosecutor Bryant Barton said in the September hearing. Officers searched his backpack after receiving a tip.

“They were informed by a student that another student was suspected to be in possession of a BB gun and marijuana inside of a backpack,” Barton said.

Inside, they found not a BB gun but the Kel-Tec, with at least one .22 magnum cartridge in the magazine, Barton said.

Barton did not say where the boy obtained the gun.

As part of his probation, he must stay employed or return to school. He also cannot own a weapon, use drugs or join a gang, among other stipulations, Roberts said.

According to the weapons policy listed in the Free State student handbook, bringing a weapon to school is grounds for expulsion for at least one calendar year, but this punishment can be modified by the superintendent on a case-by-case basis.

Julie Boyle, the Lawrence school district’s director of communications, did not immediately respond to a request to confirm that the teenager is not currently enrolled in Lawrence Public Schools.

Editor’s note: This story has been revised to reflect that 12 months was the maximum that the judge could have ordered.