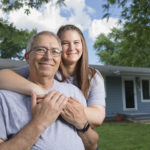 For years, Baldwin City resident Steve Hemphill knew that he would eventually need a kidney transplant. In January of 2017, he received the transplant from his adopted daughter Sara Hemphill. The two are pictured on Wednesday, May 23, 2018 outside their home.

When she learned her adoptive father would eventually need a kidney transplant, Sara Hemphill never had a doubt she would be the donor.

“I always felt that when his kidneys started shutting down and a transplant was in sight, that it was going to be me,” she said. “There was never a doubt. I was at peace with being the donor and was sure of it.”

In January 2017, Sara did indeed provide a donor kidney to her father, Steve Hemphill, who with his wife, Karen, adopted her into their Baldwin City home when she was 2 weeks old.

Her father had known for years he would eventually need a kidney transplant. Steve said he learned he had polycystic kidney disease soon after his father was diagnosed with it.

“It’s passed down genetically,” Steve said. “It causes cysts to grow in the kidneys and replace healthy tissue. Dad didn’t know he had it until it was diagnosed when he was about 60. At about the age 60, it gets to the point you need a transplant.”

He, his sister and brother were tested for PKD after his father’s diagnosis, Steve said. He and his sister’s tests came back positive.

Steve said his father never received a transplant and was on dialysis until he died in his late 60s. He and his sister were tested regularly, with transplants becoming an option when kidney functions fall below 20 percent. Steve, who is the information technology director of the Baldwin City school district, learned in August 2016 that it was time he receive a donor kidney.

“Actually, my kidney function got down to 10 percent,” he said. “I was working and feeling fine. I was lucky. Some people experience a lot of pain or fatigue.”

The pain would come. Both Steve’s existing kidneys were removed in November 2016 because they had swollen to the point there was no room for a new transplanted kidney.

“The average kidney weighs 5 or 6 ounces,” he said. “When they removed my kidneys, each weighed 8 pounds.”

Steve recuperated for two months after the surgery, surviving on dialysis and already aware that his daughter would be his donor.

Watching her father struggle after his kidneys were removed increased her resolve to move forward with the donation, Sara said.

“I watched my grandfather go through it,” she said. “He died when I was 12. I saw him slowly lose his health. I didn’t want Dad to go through that. I was terrible seeing my dad not being the way I knew him to be. It was frustrating because I knew the only thing that could make my dad feel better was my kidney.”

Her faith that she would be the donor never faltered, even when a transplant consultant with the University of Kansas Medical Center, where the transplant surgery would be performed, called and said she was no longer a viable candidate because she’d had West Nile Virus.

“I said, ‘This isn’t true. It’s a fluke,'” she said. “The transplant coordinator guy was amazing, and said they would do the test again. It came back clean. I knew it. I knew we were going to continue down this path the Lord had brought us to.”

Transplant matches are graded on a scale of 1 through 6, with 6 being the best and least likely to be rejected, Sara said. The high numbers are usually associated with siblings or other close relatives.

“Dad and I were a match of 5,” she said. “That was a really good match. Who would have thought that an adopted daughter would match that well?”

Sara characterized kidney transplants as “routine,” and the KU Medical Center website states its surgeons have performed more than 2,500 kidney transplants since 1969. That doesn’t mean they aren’t painful and traumatic. They tend to be harder on the donor, who is actually losing an organ and doesn’t get the sudden benefit of a healthy functioning kidney.

“It was kind of hard in the hospital,” she said. “I had a lot of pain and nausea. Dad was walking the hallways and partying it up.”

He and his family came through the ordeal remarkably well, Steve said.

“There’s people who go through 20 or more possible donors and don’t find a match,” he said. “We consider it a real gift from God. He knew what all our needs were before we did.”

It’s a family joke that she will never have to get her dad a gift for Father’s Day or any other occasion because of the lifetime gift she made with her kidney donation, Sara said.

Her father repaid that gift with a moment she will cherish for the remainder of her life. That moment occurred the day they both returned home, when Steve came into her room as she sat on her bed, in pain and unable to lie down.

“He said he was going to help me,” she said. “I told him he shouldn’t do that so soon after his surgery. He sat down on the bed and, with tears in his eyes, said, ‘Thank you.’ Those two simple little words from the father who has given me so much since he and my mom brought me into their home made me know everything was worth it. It’s a memory I’ll have with me forever.”