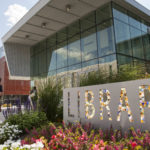 If you think libraries are just for books, think again. Board games, ranging from the classics to the obscure, are now a part of the Lawrence Public Library’s permanent collection, allowing patrons to check out and take home a new game (Exploding Kittens, anyone?) for up to two weeks.

“We’ve been looking at adding more non-traditional items to the collection,” Otten says. “So, we kind of brainstormed some of the things other libraries have been circulating other than books and magazines and DVDs, and board games were one of the things that were at the top of the list.”

The new additions — which include favorites like Connect 4, Jenga, Risk and Apples to Apples — follow a larger trend in the library world dubbed the “Library of Things” movement, in which libraries and other public agencies act as “borrowing centers” for items not typically loaned by library collections. This could include everything from “gardening tools, cotton candy machines and sewing machines,” Otten says, to toys, craft supplies, musical instruments and more.

Board games, he says, were the “one thing” library staffers wanted to try first. Why? Studies have shown board games to increase brain function, reduce stress, release feel-good endorphins and lower blood pressure, the library says. They’ve been shown to teach important skills like goal-setting and patience, and can enhance creativity and confidence, Ottens points out.

There’s also a “nostalgia factor” for today’s young parents, many of them born at the tail end of Generation X, spanning approximately from the early 1960s to early 1980s, or in the early years of the Millennial generation.

To put this all into context, Ottens says games like Jenga, which launched in the late 1980s, and Apples to Apples, an immediate hit when it hit shelves in the summer of 1998, have been popular selections at the library so far.

“Definitely older adults or Millennials these days remember playing those and want to share them with their families,” Ottens says.

Other games that have proved popular in recent weeks include Cards Against Humanity, Settlers of Catan, Exploding Kittens and family-friendly adventure game Trekking the National Parks.

Niche options have been surprisingly popular, too, Ottens says. One example: “Bold Moves,” a board game based on the political intrigues of the 1812 presidential election.

“It was gone off the shelf the second day we had the collection out,” says Ottens.

Here’s how the system works: Visitors can check out games in the same way they would with books and other materials, at the self-check kiosks near the library’s main entrance. Checkouts are limited to one game per library card at a time, with guests allowed to check out games for a maximum of two weeks.

You can place holds on the board games you’d like to check out next, and renewals are allowed if the game isn’t already on hold for someone else. The library is also counting on patrons to notify staff if pieces go missing. Game companies are usually happy to send replacement pieces, Ottens says.

The library launched the new collection on a Monday, May 14. Four days later, there were only seven of the library’s 55 games left on the shelves, with a number of holds already being placed on a number of popular options, Ottens says.

“I think initially there’s been a great response,” he says.

Guests can also submit suggestions for the games they’d like to see added to the collection. So far, Ottens says, requests have included classics such as Scrabble, Trivial Pursuit, Pictionary and The Game of Life.

Ottens says library staffers expect to expand the collection within a month or so, after seeing how current selections fare first. You can peruse games in-person inside the library’s atrium or check out a full list of available games at www.lplks.org/news/new-board-game-collection.