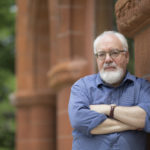 University of Kansas professor of sociology David Norman Smith along with Eric Allen Hanley, associate professor of sociology at KU, recently published a study in the journal Critical Sociology that details the voting behaviors of Trump supporters in the 2016 election. Smith is pictured on Wednesday, May 16, 2018, on the KU campus.

In the year and a half since Donald Trump’s unexpected election to the presidency, a prevailing theory has emerged: It was “economic anxiety” that led disillusioned, working-class white voters to cast their ballots for the New York real-estate mogul.

A recent study out of the University of Kansas suggests otherwise. Drawing from American National Elections Studies data, KU sociologist David Smith found that theory to be an inaccurate stereotype, albeit a “well-intentioned” one, that ignores the millions of white, working-class voters who he says voted against Trump because they opposed his attitudes toward minorities, Muslims, immigrants and women.

“The election study results show that pocketbook worries are common across all boundaries,” says Smith, a professor of sociology at KU. “Trump voters, Clinton voters, pretty much all voters expressed a similar level of pocketbook concern.”

In other words, financial stress didn’t distinguish Trump supporters from other voters in the 2016 election, says Smith.

His findings, co-authored by Eric Hanley, an associate professor of sociology at KU, were recently published in the journal Critical Sociology. For their analysis, Hanley and Smith used American National Election Studies data on 1,883 presidential election voters, of whom 52 percent voted for Trump.

They examined voting behavior along demographic lines — gender, education, age, marital status and income level — and in connection with a dozen different attitudes. Among these were biases and the desire for “domineering and intolerant leaders who are uninhibited about their biases,” according to the Critical Sociology paper.

After the 2016 election, “a lot of people in the liberal camp” and others looking to understand Trump’s victory accepted the notion that his supporters were simply rallying behind an outsider who promised to shake things up, says Smith. Some hoped “that a lot of people voted for Trump with regrets,” he explains, referring to the idea that some reluctantly supported Trump because of economic concerns, not because they “liked everything they heard from him.”

“Some of that may be part of the story,” Smith says. “But the major finding from the election study is that Trump voters, whether strong or mild, share opinions that are very close to each other and quite far from other voters.”

The attitudes that fueled Trump’s victory were more prevalent in some groups than others, Smith found — married, older, male and less-educated white voters were all more likely than average to vote for Trump. But Smith attributes this trend to Trump-like attitudes being more widespread among those groups.

“He seems to be a lightning rod in a way that previous politicians were not,” Smith says of Trump’s popularity.

Understanding Trump’s meteoric rise to the presidency doesn’t begin and end with the 2016 election, Smith says. He and Hanley are now turning their attention to data from earlier elections in order to better comprehend the nation’s growing political divide.

They hope to submit their findings, which will also examine the stereotype of the “white working class,” for publication within the next few months.