Renewing tags in Kansas? There’s now an app for that 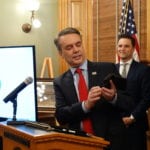 During a March 29, 2018, news conference, Gov. Jeff Colyer demonstrates a new mobile app called "iKan" that allows users to renew their vehicle registrations online. State officials said they also plan to expand uses of the app to provide access to other services like accessing birth certificates and registering to vote.

Topeka ? People who live in Kansas can now renew their vehicle registrations using a smartphone or other mobile device, and before long, other state services will be available through a new digital platform as well.

“The launch of this exciting service will provide a noticeable change as far as the ease and transparency of government and the convenience of accessing central government services,” Colyer said at the news conference.

The app can be downloaded to mobile devices that use either the iOS or Android operating systems. People using desktop computers can also access the services through a website, ikan.ks.gov.

Currently, the app only offers vehicle registration renewals, but within the next few months officials said it will allow people to access vital records, such as birth certificates, and to process voter registration applications.

PayIt is a company that specializes in developing digital platforms for customer transactions specifically for state and local governments.

“One of the things we believe in is accessibility, transparency, convenience,” John Thomson, CEO of the company, said during the news conference. “Consumer behavior patterns have changed dramatically over the last several years, and this is a response to that.”

Thomson said his company has developed similar products for the states of Florida, Texas and Illinois, as well as a number of large cities around the country.

Before Thursday’s announcement, Thomson said the iKan app went through extensive testing in Shawnee County, and he said so far, no problems have been detected.

He and Colyer also gave assurances that data people submit through the application is secure from outside hacking, and that neither the state nor the company will ever sell or transfer that data to third parties.

“Contractually, we do not share or sell any data,” Thomson said.

Donna Shelite, the state’s interim chief information technology officer, said PayIt was selected to build the app through a competitive bidding process. She said the contract requires no upfront payment to the company. Instead, the system charges a $2 convenience fee for each transaction, which will then be paid to the company.