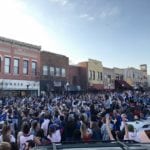 Standing at the bar of the Burger Stand, John Merker patted his chest for a solid minute after Grayson Allen’s driving shot rimmed out of the hoop as time expired in regulation, denying Duke an Elite Eight victory against the Jayhawks.

“My heart is pounding,” the University of Kansas graduate and Shawnee resident said. “I need this win. That’s all I can say. I think it’s been the best game of the tournament with so much on the line and all the lead changes.”

The game was close all the way, with the Jayhawks often a nose behind in the waning minutes of regulation. Things finally broke KU’s way for good when sophomore guard Malik Newman connected on a 3-point shot with 1:45 left in overtime.

As the final horn sounded and KU earned a berth in its first Final Four since 2012, fans screaming “Final Four” dashed from downtown bars, first congregating at Eighth and Massachusetts streets before moving en masse a block to the south and filling Mass Street from Ninth to 11th streets.

As she joined the edge of the crowd, KU senior Emmile O’Hara said the wild scene was a response to the tense, tight game and the Jayhawks’ tournament heartbreak of recent years.

Officer Tom Britton and three other Lawrence police officers took their station on the 800 block of Massachusetts Street after watching the game together. They quietly traded high-fives with happy Jayhawks, many of whom had a plastic cup of beer in the other hand. They were among the about 60 Lawrence police officers and Douglas County Sheriff’s Office deputies on postgame duty, Britton said. As the wild scene unfolded, they gave fans a pass for drinking beer on the street.

“The big thing is we don’t want glass on the street,” Britton said. “It’s fine if everybody with the beer stays calm. We were out in 2008 (KU’s national champion year) and 2012. This seems even more enthusiastic because the game was so close.”

As he walked away from the still-partying crowd 45 minutes after the game, KU senior Jack DeVries, of Wichita, said the game was awesome and exhausting.

“I’ve been waiting for a Final Four my entire college experience,” he said. “I’ve waited four years and now I’ve got it. I would have been crying if Duke won.”

DeVries was confident about the Jayhawks’ chances in the Final Four and Saturday’s opponent, Villanova.

The game lived up to the classic that David Lassley, an employee at Free State Brewery, predicted about 40 minutes before tipoff.

“I hardly slept last night,” he confided to friends. “I even got home early. I’m pumped.”

Lassley pegged his confidence level at 7 to 7.5. It would have been higher, except for the Jayhawks’ late struggles Friday against Clemson.

Lassley said he had mixed feelings about the opponent. He likes Duke coach Mike Krzyzewski but disliked the team.

“They always have someone on the team it is easy to hate,” he said.

As of 9 p.m. Sunday, Lawrence police said via social media that there had been no arrests and no citations.

Massachusetts Street had been closed to traffic around 7 p.m. Sunday, but reopened before 9 p.m.

#kubball is in the Final Four and the celebration has started on Mass Street in Lawrence pic.twitter.com/psM1vK2Ijw

• KU Sports Extra – To The Final Four They Go