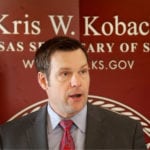 Kansas City, Kan. ? A visibly angry federal judge blasted Kansas Secretary of State Kris Kobach on Tuesday for his office’s failure to ensure that certain voters are notified that they are eligible to vote in the upcoming election while a lawsuit over a state voting law makes its way through the courts.

U.S. District Judge Julie Robinson criticized Kobach during a hearing on a motion from The American Civil Liberties Union to hold Kobach in contempt of court for not updating the state’s election guide or ensuring that county election officials send postcards to residents who registered to vote at driver licensing offices without providing proof of citizenship. Tuesday’s hearing came after seven days of testimony in the ACLU’s challenge of the state’s voter registration law.

Kobach, a conservative Republican who is running for Kansas governor, argued he is not in contempt in part because sending the postcards and revisions in the state’s election guide were not explicitly addressed in a preliminary injunction Robinson issued in May 2016 and a later written order. The injunction found that Kansas can’t require voters to produce proof of U.S. citizenship, such as a birth certificate or U.S. passport, when they register at licensing offices.

Robinson said several times during the hearing that her ruling made it clear the voters covered by her injunction were not to be treated differently from other registered voters. She also said Kobach had assured her in telephone hearings that he had instructed his office to order county election officials to mail the postcards to all voters covered by her order.

“Why would I order something in writing that you’ve told me is being taken care of?” Robinson asked Kobach. “(As an officer of the court) you are under an ethical obligation to tell me the truth. If you tell me you are going to do that, I trust that.”

The secretary of state’s office has no authority to order county officials to follow directions from his office, Kobach told the judge.

Kobach said he took the manual offline because Caskey intended to update it. He said he deferred to Caskey to decide when the changes would be made but the revisions would take several months.

“Isn’t one of the advantages of having the manual online is that they can be modified quickly?” said Robinson, who later added it was a “ridiculous system” to take so long to change a few sentences in the manual.

Robinson did not indicate when she would issue a ruling on the contempt motion.

Kobach was held in contempt of court last year for misleading the court about the contents of documents he was photographed taking into a November meeting with then President-elect Donald Trump. The court fined Kobach $1,000 and ordered him to testify about the documents.

Earlier in the case, contempt proceedings against him that had been scheduled before the 2016 election were halted after Kobach agreed to allow thousands of voters to cast traditional ballots, rather than force them to use provisional ones.