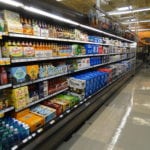 The beer aisle at the Dillons store at Sixth Street and Wakarusa Drive is shown in this file photo from April 2017.

Topeka ? Gov. Jeff Colyer signed a bill Thursday aimed at protecting a stream of sales tax revenue that would otherwise go away in 2019 when grocery stores and convenience stores will be allowed to sell strong beer.

Colyer’s office announced Friday that he had signed into law House Bill 2502, which provides that when those retailers start selling strong beer on April 1, 2019, they will continue to collect retail sales tax on those purchases instead of the state’s liquor enforcement tax.

Currently, the only alcoholic beverage those stores can sell is called “cereal malt beverage,” or CMB. It is also known as 3.2 beer, or weak beer, because it contains only 3.2 percent alcohol by weight.

But most other states have repealed laws dealing with cereal malt beverage, and there is now concern that beer manufacturers will soon stop making it, which would leave Kansas grocery and convenience stores without any kind of beer product that they could sell.

Last year, lawmakers passed a bill to allow those stores to start selling stronger beer, with up to 6 percent alcohol by volume, starting April 1, 2019.

In Kansas, though, cereal malt beverage is subject to sales tax, and stronger beverages are subject to state liquor taxes.

That meant some communities, especially small towns where a convenience store or bait store is a major source of local revenue, stood to lose from potential loss of sales tax revenue from CMB sales.

City leaders have committed to a public review of the Lawrence Police Department’s use-of-force policies, with ...