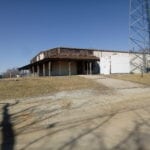 Baldwin City is in the process of buying the former restaurant at 203 First St. to renovate as a new police station. The building will provide the police department with twice the space of its current downtown headquarters.

It was an afternoon drive thatled to the impending move of the Baldwin City Police Department from downtown to a former restaurant on U.S. Highway 56, said Casey Simoneau.

Simoneau, who was sworn in as Baldwin City mayor in January, said he was driving around town when it occurred to him that the 5,000-square-foot building on the city’s east side could be the solution to the need for a larger, more secure police station.

“I thought it would make a good location,” he said. “I thought it was a good idea to take an older building in our community and fix it up and get this done for half the price of the previous proposal.”

Last month, the Baldwin City Council authorized purchasing the building at 203 First St. for $260,000. The city has a contract on the building but is still waiting for the deal to close, Simoneau said. The site was the home of the Wooden Spoke Restaurant until it moved last year to its current location at 203 Ames St.

The Baldwin City Council previously discussed the possibility of building a new police station in the current Baldwin City Public Works yard south of the 600 block of High Street once public works relocates to its new facility now under construction on Orange Street.

That discussion started four years ago because of the space and safety inadequacies at the police department’s current home in a 1,200-square-foot former flower shop at 811 Eighth St. The stumbling block was the cost of a new building, which Baldwin City Police Chief Greg Neis said would be at least $2.1 million.

The new highway site would double the space available to the police department, Simoneau said.

“I don’t see us outgrowing this for some time,” he said. “We would have to grow substantially for us to outgrow that building. It’s probably bigger than what we would build new, and it’s a much better utilization of city funds.”

One advantage of the public works property was that it would keep the police station downtown and near Baker University, but Simoneau said there were offsetting advantages of the new site. The city has approached Lawrence-Douglas County Fire Medical about relocating its Baldwin City ambulance station to the highway site from its current location at 212 Kibbee St.

“I would have loved to keep it (the police station) downtown, but there is no building downtown large enough,” Simoneau said. “I wanted to take an existing building rather than build new. Fifty percent of our police department’s call load is on the highway. If Fire and Medical relocates, they would be right on the highway.”

The new building does need to be renovated. Neis said he and city staff were still reviewing plans. How much it would cost would depend on whether Fire and Medical decides to relocate to the site, but the chief does have a number in mind.

“My estimate is we can get in there for $1 million,” he said. “That includes the purchase price.”

Neis also estimated it would be until January 2019 at least before renovations were complete and the police department could move into its new headquarters.

The new site would address the shortcomings of the current station: lack of storage space, absence of separate interview rooms when two or more suspects are being interrogated, a single restroom and no space of staff meetings or training, Neis said.

“I feel very good about what we can get in there,” he said. “It will be a lot more useful for us and a lot more functional.”