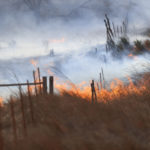 TOPEKA — Dozens of wind-blown wildfires in Kansas have closed highways and prompted evacuations.

State officials say nearly 50 wildfires have erupted in the state since the weekend, mostly in central Kansas stretching from the Nebraska to the Oklahoma borders.

So far, the fires have burned about 40 square miles.

Most of the fires have been contained or extinguished, though strong winds complicated the firefight Tuesday with gusts in western Kansas topping 70 mph.

Officials say at least one home caught fire in southeast Kansas’ Elk County. Strong winds also blew over a communications tower in Logan County on the western side of the state.