As Lawrence students gear up for gun-control protests, adults pledge support in ‘Wrap the Walkout’ campaign 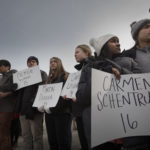 Several hundred Free State High School students protest gun violence in schools by walking out of class, Wednesday, Feb. 21, 2018. Students, who returned to school for the first time since learning of a shooting threat made by a classmate on social media, held signs with the names and ages of the 17 victims of the recent school shooting in Florida.

For 17 minutes starting at 10 a.m. on March 14, students, teachers and their supporters across the country will stage walkouts to honor the 17 victims of last month’s Parkland, Fla., shooting and to protest gun violence.

Chisato Kimura, a senior at Lawrence High School, plans to be among them. Kimura, 18, is one of several student organizers involved in next week’s protest, itself a part of the National School Walkout movement spearheaded by the National Women’s March Network.

She’s hoping the protest will bring awareness (and, ultimately, change) to an issue that she feels has been long ignored by lawmakers. Kimura said she understands the disappointment and anger voiced by the young survivors of last month’s shooting, many of whom have since aggressively lobbied their congressional leaders for tighter gun control.

“There are people dying because of the lack of policies now, and lawmakers seem very reluctant to make a policy change,” Kimura said. ” … That’s something that’s very frustrating to see.”

March 14, the day of the walkout, marks one month since the shooting at Florida’s Marjory Stoneman Douglas High School. Since then, “even our president,” Kimura said, has suggested arming teachers as an answer to gun violence in schools.

But Kimura, whose mother is a teacher, doesn’t see that as a viable solution. “I think arming her is probably not the best idea,” the teenager said.

In the weeks following the Parkland shooting, Kimura and her peers have formed their own gun-control advocacy group, Students Advocating Firearm Reform, or SAFeR. The March 14 protest will mark the organization’s first official event, and the students won’t be alone in their efforts that morning.

Kelly Barth plans to attend the walkout at LHS that morning as part of “Wrap the Walkout,” a local initiative calling on adults to “wrap” themselves around the school in a symbolic show of support and protection.

The longtime Lawrence resident sympathizes with students who have felt frustrated by “the nation’s and state’s leaders protecting people’s gun rights over protecting the students themselves.”

“I just signed on because I saw other walkout events across the country and thought I’d want to be supportive of the students in my neighborhood,” Barth said. “I want them to know that the adults around them care about what happens to them.”

“It’s just terrifying to have a son in middle school in the current climate,” said Enfield, whose sixth-grader attends Liberty Memorial Central Middle School. “I think the best thing that’s come of this is the students are being really strong and speaking out for themselves. They’re being really brave, and I want them to continue that, and I do hope it’s something he’ll see and feel empowered by.”

For Kimura and her fellow student activists, the walkout is just the beginning. The SAFeR group is already planning a protest outside the Kansas State Capitol in Topeka on March 24, the same day students from across the country will “March for Our Lives.” The national demonstration, spearheaded by Parkland shooting survivors in collaboration with Everytown for Gun Safety, will take place in Washington, D.C., and in communities throughout the U.S.

On April 20, Kimura said, students from both LHS and Free State High School will take part in the National High School Walkout movement. The plan calls for high school students across the country to walk out of classes on April 20, the 19th anniversary of the Columbine, Colo., shooting, from 10 a.m. local time until the end of the school day. Students are encouraged to stand together in silence for 17 minutes, honoring the 17 victims of the Parkland shooting, before participating in an open mic.

In Lawrence, students will walk out at 10 a.m. and travel to South Park, where Kimura and other organizers are planning a community event with food, music, speakers and more gun-control activism.

The movement is student-led, Kimura said, but it’s not just about students. “We want to create not just safer schools but a safer America,” she said. “That’s our ultimate goal.”

“Personally I’m hoping that if we continue to speak out, there will be some policy change,” Kimura said. “We’ll have to keep raising our voices so that congressional leaders will know that we’re not going away anytime soon. We’re here to stay until we see the policy changes we’re demanding.”

Julie Boyle, the Lawrence school district’s communications director, said school principals are aware of the planned protests and have had conversations about the events with students and staff.

“They continue to work together to ensure that students are safe and able to have their voices heard,” Boyle said in an email. “The district respects the rights of all students, whether they choose to participate or not.”

Classes will follow the regular schedule March 14, she said, and any absences associated with the national walkouts will be excused.