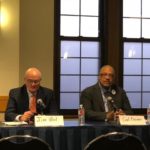 Jim Ward and Carl Brewer discuss the rising costs of higher education at a panel at the Kansas Union on Wed. March 7, 2018.

Two Democratic candidates in the upcoming race for Kansas governor spoke Wednesday night at the University of Kansas on an array of topics related to rising costs in higher education.

House Minority Leader Jim Ward, D-Wichita, and former Wichita mayor Carl Brewer joined students from the group KU Against Rising Tuition at the Kansas Memorial Union and discussed the importance of reinvesting in Kansas, ways to lower university tuition costs, as well as a somewhat controversial topic: the use of the University of Kansas’ private jet.

“I do think things like the jet give people who don’t want to invest in higher education an excuse not to do it,” Ward said. “That is a problem in my world, when they point to that jet and say ‘really?’ … “It hurts in Topeka. It’s one of those things that just doesn’t fit when tuition is skyrocketing.”

Brewer said conversations regarding higher education simply have to address the importance of fully investing in the education itself.

“We have to invest not only in the students, but we have to invest in the teachers. That’s the key to the entire thing,” he said. “We can’t invest enough in education. We’ve got to start making things where they’re cost effective.”

Regarding the use of the private jet, Brewer was not as vocally opposed as Ward, who said he had discussed his concerns over the aircraft’s use with KU Chancellor Douglas Girod. However, he said the jet should be looked at critically, and the decision whether or not to sell it should come down to business sense.

“Do the math. And if the math doesn’t make sense, then certainly, you shouldn’t do that,” Brewer said. “If the state is paying for fuel and maintenance of this aircraft, I’m curious why other universities don’t have their own aircraft.”

Lev Comolli, a University of Kansas student who serves as president of KU Against Rising Tuition, said the group understands issues that impact students, which is why it works to host events like Wednesday’s panel.

“We have a presence in this community. We understand the issues to the point where our community themselves, they can empathize and they can relate,” he said. “Our interests are directly related to the immediate interests of everybody.”

Republicans Ken Selzer and Tom Sloan were also scheduled to attend the event, but had to cancel at the last minute, Comolli said.