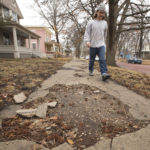 Lawrence resident Ryan Fitzpatrick makes his way south along the 900 block of Rhode Island Street past a section of crumbling sidewalk on Wednesday, Feb. 28, 2018.

Millions of dollars in backlogged repairs to Lawrence sidewalks could now be added to the tax bills of Lawrence property owners.

At their meeting Tuesday, city commissioners directed city staff to proceed with an administrative policy that details how the city will systematically enforce its existing ordinance that requires property owners to repair hazardous sidewalks adjacent to their properties. If property owners fail to make the repairs within a certain time frame, the city will make the repairs and could add the cost to residents’ property tax bills.

The policy includes a financial assistance program, and one question raised has been how much money the city will provide toward that program. Mayor Stuart Boley said he thinks the city needs to fully fund the program for those who qualify.

“I’m willing to go into the budget and say we need to fund not just the (Americans with Disabilities Act-mandated) ramps and the city responsibilities, but also the cost share and the assistance,” Boley said.

As currently written, the policy leaves open the possibility of financial assistance for residents who own and occupy their homes and are low-income or have more than one adjacent sidewalk, but it does not guarantee it. The policy states that the commission “may” fund such assistance “if funding is available.” It also notes that assistance would be first come, first served.

City staff has divided the city into eight districts and plans to address one per year. Because of its lower density and relatively newer sidewalks, the city will begin with a district in northwest Lawrence. The city will begin sending repair notices to property owners next year, and will come back to the commission to refine the policy following the completion of the first cycle.

Several local groups, including the Lawrence Association of Neighborhoods, have said that sidewalks are public infrastructure and called for the city to take on responsibility for sidewalk repairs or come up with a way to fund repairs that spreads the cost equally among residents. LAN representative Candice Davis told the commission that 14 neighborhoods voted in favor of LAN’s statement against the policy.

Only one commissioner, Jennifer Ananda, explicitly said she thought the city should have a referendum to ask voters whether the city should take on financial responsibility for sidewalks citywide.

Although other commissioners did not call for a vote now, some said they don’t disagree with the notion that sidewalks are public infrastructure. Vice Mayor Lisa Larsen said she thinks the policy is “leading there,” and that the commission could be having a different conversation in five years.

“As a community and as a nation we are re-evaluating how we view transportation,” Larsen said. “Is this a perfect step toward that? No, but it’s a step in the right direction, I believe. I would love to just have this paid for by the city because I agree it’s infrastructure, but we’ve got to start, and I believe this is a decent start.”

After decades of not fully enforcing the ordinance, the city estimates there are $6.6 million in sidewalk repairs that are the responsibility of private property owners under the city’s standing ordinance. Under the new policy, the city will annually bid out sidewalk repairs for that year’s district and would allow property owners to make use of the contractor and price established by the bid. Funding levels for the financial assistance program would be decided annually as part of the budget process.

For those who don’t comply with repair notices within 60 days, city staff will prepare a resolution for the commission to condemn the sidewalks. The city will then make the necessary repairs and bill the property owner. If the property owner doesn’t pay the bill outright within 30 days, it will be added to property tax bills and can be paid in four annual installments.

• Approved a memorandum of understanding with the Johnson County Commission to help fund the K-10 Connector bus service for the next four years. Beginning this year, the agreement increases local funding for the service from $120,000 to $135,000 per year and up to $155,000 from 2019 through 2021.