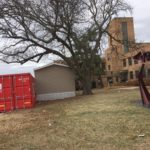 A view of the Senior Resource Center and Fire Station No. 1 as seen from the intersection of Eighth and Vermont streets in downtown Lawrence on March 5, 2018. The two facilities share a building on the corner of Eighth and Kentucky streets.

The Lawrence Cultural Arts Commission is seeking applications for a public art project as part of renovations to the city’s historic Fire Station No. 1 and Senior Resource Center, located near the intersection of Eighth and Kentucky streets.

A recently posted request for qualifications calls for artists to develop “innovative, original art” as part of the estimated $5.33 million restoration. The $25,000 public art project is open to all professional artists in Kansas and Missouri.

Porter Arneill, the city’s director of communications and creative resources, said the project was approved as part of last year’s budget but had been sidelined because of delays with the larger restoration efforts. Renovations to the facility, which is shared by the fire station and Senior Resource Center, were scheduled to begin earlier this year.

Fire Station No. 1, at 746 Kentucky St., is a midcentury modern-style structure built in 1950 as the city’s public safety building. One of the city’s busiest stations, it’s been flagged as needing significant renovation in order to meet ADA compliance. Renovations also include converting dorm-style bedrooms into private rooms, increasing sleeping space and adding more fire poles.

A selection panel — comprising art and design professionals, residents, fire department and Senior Resource Center representatives, and city staff — will select a small group of finalists for interviews and to possibly develop proposals for the public art project.

Criteria used by the panel will include: artistic quality, innovation and originality; professional public art experience, sensitivity to the site and intellectual expression, according to the RFQ. As for what the project might look like and where it might be located on the property, Arneill said the city has no parameters as of yet. Because of restrictions on historic building renovations, however, he doesn’t expect to see a mural painted along the side of the building, for example.

“By design, what I try to do is keep the project as open as possible to allow artists to bring their best thoughts to the table,” Arneill said. “But certainly when there’s a project that’s already existing and has historical requirements, the opportunities will be limited.”

A large metal sculpture — “Stegodopterus” by Pennsylvania artist John Parker — has graced the green space in front of the fire station and Senior Resource Center for several years now, after making its Lawrence debut during the eighth annual Outdoor Downtown Sculpture Exhibition in 1995. Arneill said the sculpture may change locations with the arrival of the new public art project, though that’s all dependent on the winning proposal.

“We’re definitely excited to have local and regional artists apply for this opportunity,” he said.

The shared building has been vacated in preparation for remodeling, with firefighters working out of a trailer on the site along Kentucky Street. The Senior Resource Center has moved to a temporary location at 2920 Haskell Ave.

Qualifications are due by midnight April 2, with panel reviews slated for April and/or May 2018. Proposals will be reviewed and artists selected in April and/or May. Restorations are expected to be completed by spring 2019.

An online application form and the complete RFQ are available for download at lawrenceks.org/public-art. For more information, contact Porter Arneill at parneill@lawrenceks.org or 832-3402.