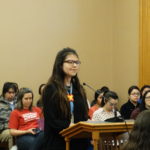 Georgia Blackwood, an eighth grade student at South Middle School in Lawrence, testifies before a Kansas Senate committee in support of a bill that prohibit state agencies and local governments from barring Native Americans from wearing their tribal regalia and other objects of cultural significance at public events, including graduations.

Topeka ? A bill that would guarantee Native Americans in Kansas the right to wear their tribal regalia and other objects of cultural significance at government-sponsored public events is on its way to the full Senate.

The Senate Federal and State Affairs Committee heard testimony Monday from several Native Americans, including some from Lawrence, who said they often face resistance when they try to wear their native outfits at events such as graduations or other kinds of public ceremonies.

Among those testifying was Georgia Blackwood, an eighth-grade student at South Middle School in Lawrence and a member of the Kickapoo Tribe in Kansas.

Blackwood said she counted herself lucky for having grown up in Lawrence, which has a large Native American population, where it’s common to wear tribal regalia at events such as graduations.

“While I plan on graduating from Lawrence High School, I wonder if my children will be allowed to wear a feather or regalia if I move away from Lawrence,” she told the committee. “I shouldn’t have to worry about leaving Lawrence and wonder if the town I move to has policies against restricting Native American cultural beliefs and practices.”

House Bill 2498 cleared the House on Feb. 21 by a vote of 122-0. It is sponsored by Rep. Ponka-We Victors, D-Wichita, who is a member of both the Ponca Tribe of Oklahoma and the Tohono O’odham Nation in Arizona.

Dressed in her own regalia made of deer skin, and wearing an eagle feather in her hair, Victors said Native Americans consider their traditional clothing as formal attire in the same way European-Americans view suits.

But she said it is common for Native Americans to be forbidden from wearing their traditional clothes at ceremonial events, although she did not cite any specific examples of instances in which that had happened, and she suggested that kind of cultural bias contributes to a sense of isolation among Native American youths, who suffer from high rates of suicide and substance abuse.

“I don’t want to discourage our students from trying to be who they are,” Victors said. “Identity is a big part of that, so this bill will help them to be free to be proud of who they are as native people.”

Several other Native Americans, many of them wearing their own regalia, testified in favor of the bill. Among them was Liana Onnen, chairwoman of the Prairie Band Potawatomi Nation, headquartered in Mayetta, who said the bans that some public agencies impose on the wearing of formal tribal clothes is just an extension of the “assimilation” policies of the federal government that have wreaked havoc on native culture.

“One of the most devastating was the assimilation policy that resulted in Native children being forcibly taken from their homes and families,” she said. “Their hair was cut and they were forbidden from speaking their language and practicing their culture in any way. In many cases, the ‘Indian’ was literally beaten out of those children.”

Victors noted that although there is currently nothing in state law that prohibits wearing traditional regalia, and there is nothing specifically authorizing local governments from doing so, such bans occur frequently anyway, usually in the form of dress codes for formal events.

The bill now goes to the full Senate. If approved there without any amendments, it would then go to Gov. Jeff Colyer for his signature.