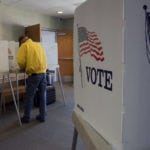 In this file photo from April 2011, a voter casts his ballot at New York Elementary School.

Public schools will no longer be used as polling places, Douglas County Clerk Jamie Shew said Wednesday, which means more than 10,000 voters will be assigned to different polling places than they’ve used in the past.

In a phone interview, Shew said he made the change at the request of Lawrence school district officials who cited security concerns over allowing people easy access into and out of the buildings while classes were in session.

Earlier this week, the county clerk’s office sent letters to the affected voters saying that the Lawrence school district “has informed our office that school facilities are no longer available to be used as polling places.” The letters, which were individualized for each precinct, go on to inform voters of their new polling place.

In response to questions from the Journal-World, Shew provided a copy of an email dated Dec. 14, 2016, from Ron May, who is director of operations for the school district. May emailed Shew’s office, asking county officials to begin phasing out the use of elementary schools as polling places.

Shew said his office tried to work with school officials to continue using school buildings because in many neighborhoods it was difficult to find alternative sites that could be used as polling places.

He said his office was able to find other sites for most precincts that were using schools as polling places, but in this year’s elections, there will be some cases in which multiple precincts will be consolidated into a single polling place.

Primary elections in Kansas will be held Tuesday, Aug. 7. The general election will be Tuesday, Nov. 6.

• Check your current polling place and voter registration at the Douglas County Voting and Elections website.

Notifications of polling place changes for 2018 were mailed this week. We had to find replacement sites for polling…