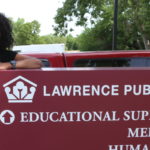 Anna Stubblefield will step away from her one-year tenure as interim superintendent confident that she accomplished the task asked of her when the Lawrence school board appointed her to the position.

“When the board appointed me, part of my charge was to steady the ship and move the district in the right direction,” she said. “Overall, I feel like the ship is steady and ready for Dr. Lewis to take charge.”

She took the interim position knowing it would require her to be the face of the district, Stubblefield said. That was not the kind of public role she had sought in the past.

“It’s not my natural inclination to be out front,” she said. “But when I applied to be interim, I realized that was one of my responsibilities, so I embraced it.”

Shannon Kimball, who worked closely with Stubblefield while serving a year term as Lawrence school board president, said the willingness and ability of Stubblefield to reach out to the community was central to the stability and direction she provided the district the last 12 months.

“Anna has been a steady and very open leader for the district,” she said. “She stepped in and has worked at building relationships and improving communications. She has provided leadership in our increased focus on equity work and establishing our District Equity Leadership Team Advisory Committee.”

Superintendent positions require long days of meetings with board members, staff, school district stakeholders, groups and educators from other districts, Stubblefield said. It was time-consuming, but the connections she made provided her opportunities for professional growth.

“I learned a lot about the experiences of other districts that face the same challenges and have the same opportunities we do,” she said. “You just get a wider perspective from the different people you engage as part of your day-to-day duties as a superintendent. I was able to meet a lot of people in the community with whom I never would have interacted.”

It’s not like her deputy superintendent duties don’t require a broad perspective. Stubblefield said in that position she directly supervises district departments of teaching and learning, special education and teacher support, food service and facilities.

The end of her superintendent duties will give her more opportunity to do something Stubblefield loves and she finds critical to sound administrative decision-making.

“My goal for next year is to be in a building every day,” she said. “I’ve been intentional as I have started to carve out things on my calendar to save time to be in our buildings to be with our students and with our staff and interact with them. I want to see what’s happening so as we are making decisions, I personally will be able to connect with our students and our staff.”

The district leadership transition should go well, Stubblefield said, because she and Lewis have established a solid working relationship since the school board hired the Kansas City, Mo., public schools administrator in January.

“Honestly, since Dr. Lewis was hired, we have been in contact on a regular basis,” she said. “We talk in some fashion at least once a week, but more so lately as he is transitioning out of his district.”

She has kept Lewis apprised and got his input on 2018-2019 budget considerations, Stubblefield said. Progress on many elements of the district’s budget have stalled while district officials wait for the Kansas Supreme Court to rule on whether the new K-12 school finance formula the Kansas Legislature passed this spring is adequate. Nonetheless, Stubblefield acknowledged she did influence the budget decisions the board has made to hire full-time counselors for all elementary schools, add three more special education teachers and create two new middle school behavioral health interventionist positions.

“The decisions the board has made based on recommendations or budget considerations that have come about, they will be externally connected with me,” she said. “I think they are very good decisions and will be very good for our students, and that’s what is most important.”

Stubblefield said she was prepared through education and experience to handle the challenges of the last year, but found one buck-stops-here decision surprisingly stressful.

“Snow days, making the decision of ultimately what we are going to do,” she said.

“There are other people who weigh in on the decision, but ultimately you make the decisions that affects so many people. That’s the one that is really your call,” she said. “There were lots of decisions I had to make that as a former principal or former director of HR that I felt like I was prepared for. There were surprises, but they were the natural day-to-day things I had the experience to deal with. Snow days were not natural day-to-day things.”

Her big takeaway for her year as superintendent is the goodwill the community has for the school district.

“The pleasant surprise for me was that regardless of whether it be students, parents or community members, people were really appreciative of me accepting the role of interim and, for the most part, people thought the district was doing a wonderful job and trying to create an environment that is supportive of all our students,” Stubblefield said. “To have people express that was always nice to hear, even if they were expressing that with, ‘Here’s a challenge I’m experiencing.'”

Her year as Lawrence interim superintendent put another jewel on her resume. But Stubblefield, who lives in Johnson County and is married to an administrator in the Blue Valley school district, said she didn’t plan to pursue any superintendent opportunities in the immediate future because of the added time commitment the positions require.

“I will never say never, but I have five more summers with my son,” she said. “I have a 13-year-old, so the five summers I have with him will take priority.”