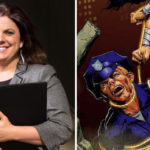 Lawrence attorney Sarah Swain is coming under fire for an illustration, which reportedly has been displayed in her law office for years, that Swain as Wonder Woman with the superhero's "Lasso of Truth" wrapped around the neck of a police officer.

The Kansas Democratic Party issued a statement Tuesday disavowing a Democratic candidate for attorney general, Lawrence attorney Sarah Swain, amid criticism from law enforcement officials who complained about a poster that hung in her office depicting a Wonder Woman-like character with a lasso around the neck of a police officer.

An image of the poster was posted on a number of social media sites, including the Facebook page of Lawrence Police Supporters, which commented: “This is a very disturbing image. Even more disturbing is it is the property of a candidate for State Attorney General. Someone who incites violence against law enforcement is not the kind of leadership we need.” 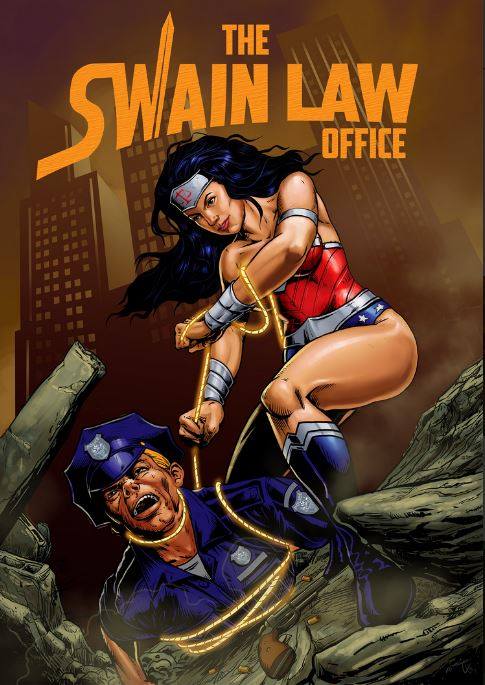 This illustration, which Lawrence attorney Sarah Swain says hung in her law office for years, depicts Swain as Wonder Woman with the superhero’s “Lasso of Truth” wrapped around the neck of a police officer.

The image of the poster started circulating just days after the deadly shooting Friday of two Wyandotte County sheriff’s deputies who were transporting an inmate back to the county jail after a court hearing.

“We strongly condemn and reject any depiction of violence against law enforcement, including the image from Swain’s law firm,” Kansas Democratic Party executive director Ethan Corson said in an email statement.

“We did not recruit or encourage Swain to run for Attorney General, nor have we had any contact with her since she filed,” he continued. “The Party has reached out to her seeking an explanation of her past posts, but she has not responded.”

Swain is the only Democrat who filed to run for attorney general in the 2018 election. She will face incumbent Republican Attorney General Derek Schmidt in the Nov. 6 general election.

Swain is regarded as an aggressive criminal defense attorney who has previously posted inflammatory comments about law enforcement officers on her own Facebook page and on that of her law firm.

On June 1, when Swain filed to run for attorney general, the Journal-World reported on two such posts, both of which have since been removed from Facebook.

On May 22, in response to an alleged racial profiling incident in Winfield, she accused local law enforcement in Douglas County of routinely doing the same thing.

“Each of these stops is done in the name of continuing to wage a war on people, also known as the War on Drugs,” she wrote. “In LFK, the police are no better. They threaten, they harass, and they pull over nearly every black and brown person they can, usually for a ‘tag light violation’ or for ‘weaving within their own lane.'”

And on May 25, she posted a scathing criticism of the Wichita Police Department after its officers found the body of a 5-year-old boy in Harvey County who had been missing since February.

“The conduct of the Wichita Police Department is truly horrifying,” Swain wrote in the post. “Our tax dollars fund a department that routinely executes innocent citizens while at the same time failing to protect the children of Wichita. They are complicit in murder.”

Swain did not respond to requests for comment on those posts, and the Journal-World was unable to contact her Tuesday regarding the controversy over the Wonder Woman poster.

According to KSHB-TV in Kansas City, Mo., however, Swain issued a statement explaining that the poster had hung on her office wall for several years, describing it as a metaphor for the difficulties often encountered when cross-examining law enforcement officers in court.

“I understand that this picture has been misconstrued by many as advocating for violence against the police and for that I apologize,” she said in the statement. “I am not anti-law enforcement; I am pro-truth. And I do not condone violence in any form.”

Swain additionally had numerous promotional “posters” she had put on social media touting her passions and positions as a criminal defense attorney.

In one of them she appears to cast doubt on the general truthfulness of rape accusers: “In my 13 years of being a criminal defense attorney, I have never represented a man charged with rape who I believe has actually raped the woman who is accusing him.”

In others, she casts herself as a lone hero beseeching “corrupt mother (expletive deleted) to “bring it on.”