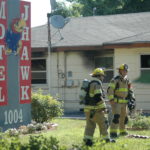 Based on the fire department’s early investigation, a fire that heavily damaged the central building at North Lawrence’s Jayhawk Motel Monday morning appears to be accidental, officials say.

The fire was reported at 8:21 a.m. in one of the motel’s four buildings — the office and owners’ residence — and flames were coming from the building when firefighters arrived, said Division Chief and Fire Marshal James King of Lawrence-Douglas County Fire Medical.

One person was inside that building at the time — the woman who owns the motel with her husband. She was awakened by a smoke alarm and got out safely, King said.

The low-slung, one-story motel at 1004 N. Third St. has three buildings that house guests, which are situated around the central office building.

Guest quarters were not harmed by the fire, King said. He said though firefighters didn’t order them evacuated, guests all got out on their own.

The fire was under control by 9 a.m., and King said firefighters began clearing the scene around 11 a.m. The building was left heavily damaged, with more than one exterior wall visibly burned through.

Late Monday afternoon, investigators were still at the scene and expected to wrap up their work by early evening, King said. He said so far it appeared to be an accidental fire, though investigators had not yet made a final determination on what caused it or exactly where it started.

Eight people were staying at the motel at the time of the fire, with some of them possibly leasing multiple adjoining units, King said.

“I thought it was the refrigerator in the room, but when I opened the door, I saw smoke billowing out of the eaves of the building,” Van Hoecke said. “It rattles you a little. I’d like to think I’m not too dramatic, but I breathed in a lot of smoke.”

A couple who said they were the owners were at the scene after the fire, waiting in the shade with several guests as firefighters worked, but they declined to share their names with the Journal-World or answer questions.

Douglas County property records indicate that the property is owned by Pravin and Lata Albee.

The man said he was not in the building when the fire started. His wife, who was seated and holding a cane, was. They said everyone was OK.

Other guests said they didn’t want to be interviewed.

The American Red Cross had volunteers at the scene of the fire Monday, executive director Jane Blocher said in an email.

“They are assisting all the clients currently staying there with financial assistance for alternate lodging, food/meals, clothing replacement and other emergency needs,” she said.

The fire response necessitated the closure of North Third Street for most of the morning, causing traffic from south of the motel and Interstate 70 to be redirected.