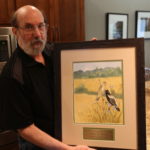 Robert Beason was surprised Sunday, June 17, 2018 with an award from the Wilson Ornithological Society. His son, Zach Beason, presented him with the award on Father's Day, after attending the society's annual meeting earlier this month to accept the award on Robert's behalf.

“There were binoculars everywhere,” she said at a Father’s Day gathering at the Lawrence home of Robert Beason’s sister and brother-in-law, Jan and Ernest Dyer. “I remember one time when I was driving, he saw a dead bird on the side of the road. He made me back up so he could identify what kind of bird it was.”

Welcome to the family, Jenna’s husband, Zach Beason, said. When he was growing up, his father would have thrown the dead bird in the trunk for further research, he said.

The 72-year-old Robert said he has been interested in birds and bird-watching since childhood. Yes, he did watch them through binoculars, but he made a professional career and reputation from observing them with radar.

On Father’s Day, Zach presented his father with the William and Nancy Klamm Service Award from the Wilson Ornithological Society. It was awarded for Robert’s contributions to ornithology and the scientific society, including serving as its president from 2011 to 2013 and as editor of the Wilson Bulletin from 1997 to 2001.

Zach traveled earlier this month to Chattanooga, Tenn., to accept the award on his father’s behalf at the Wilson Society’s annual meeting because of a brain aneurysm Robert suffered in 2015.

Although he has recovered physically, Robert does have short-term memory impairment. He now resides at Morningstar Care Home in Baldwin City, just south of his son’s home in the Vinland Valley. He retains his passion for ornithology and radar, although he admits he doesn’t make as many bird-watching outings as he did during a long career that included serving as a professor at the State University of New York at Geneseo from 1978 to 2000; serving as head of the University of Louisiana at Monroe biology department from 2000 to 2002; working as a U.S. Department of Agriculture project leader from 2002 to 2008; and, finally, holding the position of radar ornithologist with the Canada-based Accipiter Radar Technologies from 2008 until his retirement.

It was a career that married his longtime interests in bird-watching and radar, Robert said.

“I’ve been a bird-watcher since my childhood,” he said. “I’ve always had an interest in everything radar. My father worked for Boeing in Wichita on radar for the B-52.”

His work involved tracking migratory birds on Federal Aviation Administration radar units he modified, including equipment the Air Force provided him with when he was working on his doctorate in biophysics at Clemson University.

“It tracks larger birds like ducks and geese quite well,” he said. “It would track smaller birds, but not from so far away.”

Of great interest to the Air Force and FAA was the use of radar to chart the migration routes of large birds and to track where the birds were in real time so that engine-damaging midair collisions between birds and airplanes could be avoided, Robert said.

He has also studied how to reduce bird deaths at communication towers, wind turbines and oil and gas rigs. To prevent geese from hanging out near airfields, he proposed the Air Force plant a type of fescue grass that the birds don’t like to eat.

The award Robert received from the Wilson Society was an original watercolor of a pair of bobolinks perched on grass stems in an open field. Beason said his research into bobolinks extended beyond radar.

“I’d remove their skull caps to get to their brains,” he said. “I was tracing the brain circuits they used from migration and trying to figure out what part of the brain they stored information on migratory routes.”

Field research could have risks, Robert said, recounting an experience of collecting geese near a New York state prison.

“One inmate didn’t want me to take them,” he said. “They were his pets.”