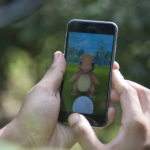 In this file photo from Friday, July 22, 2016, a Pokemon Go player attempts to catch Charmander, one of Pokemon's most iconic creature, in New Delhi, India. (AP Photo/Thomas Cytrynowicz)

Two years ago, large groups of people started to huddle in circles on Massachusetts Street transfixed by their phones. They weren’t texting, tweeting or Tindering — they were hunting invisible Pokemon in the newly released Pokemon Go app.

Although the excitement surrounding the game, in which players travel around their community to “catch” Pokemon, has died down in the years since, a group of Lawrence Pokemon Go players still use the app to host a food drive for Just Food.

The group does this as part of the national Pokemon Go community days that Niantic, the creators of the game, introduced in January to get players together. During these events, a special Pokemon is available only for three hours. Players meet at parks in hopes of catching the Pokemon and earning other bonus prizes.

Although players in Lawrence have been participating in the community days since their inception, last month they used it as an excuse to collect food donations.

Sonya Dingman, otherwise known as “Fryedpickles,” originally organized the food drive. She came up with the idea after one of the Lawrence Pokemon Go players died of cancer and fellow players banded together to take over all the spots on the in-game map as a tribute.

“I found it very encouraging to be playing this silly game for a bigger purpose,” Dingman said.

Dingman used that encouragement to organize the donations to Just Food. Participants get raffle tickets for donating food that can be cashed in for Pokemon-themed prizes.

According to its website, Just Food serves more than 8,000 people through partnerships with more than 35 agencies. In May, the Pokemon Go group’s first time hosting the drive, it collected 161 pounds of food.

It was a large donation for a group of its size, said Elizabeth Stephens, Just Food’s director of engagement.

“I’ve never seen anything like this done before,” she said. “What a great way to play a game and have that game mean something to the community.”

Eva Muhr, otherwise known as “EvaCheva,” was part of organizing the community days in Lawrence. She and Muhr plan to expand the group’s outreach by organizing donations for multiple charities in the community.

“Maybe some people think that we’re a big group of people around downtown that are in the way or something,” Muhr said. “We’re actually trying to do something for the local community and have fun.”

On June 16, the group will meet at Watson Park in hopes of catching the Pokemon Larvitar, while collecting nonperishable food items.