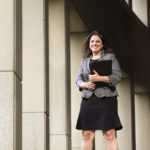 Swain, who owns the Swain Law Office in Lawrence, was active in the campaign last month to defeat Proposition 1, the proposed sales tax to fund expansion of the Douglas County Jail and develop a mental health crisis center.

She did not return phone calls Friday seeking comment about her candidacy.

According to her LinkedIn page, Swain is a 1998 graduate of Baker University, with a bachelor’s degree in political science and government, and a 2001 graduate of the University of Kansas law school.

Swain spent about 1 1/2 years working for the Johnson County Public Defender’s office, and then founded the Swain Law Firm, which has offices in Lawrence and Olathe.

As an attorney, she has represented some high-profile criminal defendants in Lawrence.

Now, after a career as a criminal defense lawyer, she is running to become the state’s chief law enforcement officer and prosecutor.

On social media, however, Swain has at times been critical of Kansas law enforcement. Her Facebook page includes multiple posts by either her or her law firm’s account calling into question the motives of law enforcement officials.

On May 25, for example, she posted a scathing criticism of the Wichita Police Department after its officers found the body of a 5-year-old boy in Harvey County who had been missing since February.

“The conduct of the Wichita Police Department is truly horrifying,” Swain wrote in the post. “Our tax dollars fund a department that routinely executes innocent citizens while at the same time failing to protect the children of Wichita. They are complicit in murder.”

And on May 22, in response to an alleged racial profiling incident in Winfield, the Facebook account of her law practice accused local law enforcement in Douglas County of routinely doing the same thing.

“Each of these stops is done in the name of continuing to wage a war on people, also known as the War on Drugs,” she wrote. “In LFK, the police are no better. They threaten, they harass, and they pull over nearly every black and brown person they can, usually for a ‘tag light violation’ or for ‘weaving within their own lane.'”