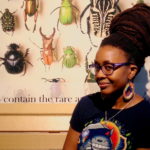 The library, in partnership with the University of Kansas’ Hall Center for the Humanities, will host “An Evening With Nnedi Okorafor” on Nov. 8 at Liberty Hall.

Okorafor is the author of African-based science fiction, fantasy and magical realism novels and comics for kids and adults, according to a news release from the library. Born in America to Nigerian parents, her “Black Panther” Marvel Comics series were used as a foundational text for the screenplay of 2018’s blockbuster film adaptation of the same name.

Okorafor’s 2010 novel “Who Fears Death,” winner of the World Fantasy Award, is currently being adapted as an HBO series with “Game of Thrones” author George R.R. Martin serving as producer. Other works include the award-winning Nebula and Hugo Award-winning novella series “Binti” and the acclaimed “Akata Witch” series, affectionately dubbed by some as “the Nigerian Harry Potter.”

Okorafor holds a doctoral degree in literature/creative writing and is an associate professor of English at the State University of New York at Buffalo.

The event is free and open to the public, and no tickets are required. The Raven Book Store will sell copies of Okorafor’s books and host a book signing following the program. The Hall Center for the Humanities will also host a student program with Okorafor on Nov. 9.