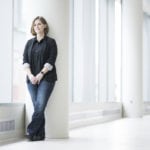 Jen Brockman, director of the Sexual Assault Prevention and Education Center (SAPEC) is pictured on Wednesday, April 2, 2018 at the Burge Union.

For a long time, and in many institutions to this day, training student-athletes in sexual violence prevention often comes down to a quick 10 or 20 minutes.

That’s the experience Jen Brockman says she had in her decades of preventative education work with college athletics departments. Brockman says that hasn’t been her experience at the University of Kansas, where she arrived in spring 2016 to lead KU’s newly formed Sexual Assault Prevention and Education Center.

It’s SAPEC’s strong relationship with KU Athletics that Brockman says has cleared the path for a revolutionary new program addressing sexual violence in classrooms across the university. This fall, for the first time anywhere in the country, student-athletes will enroll in a mandatory, annual one-hour academic course designed to help prevent gender-based violence.

The classes, which fall under KU’s leadership studies program, are also available to nonathletes, Brockman says. Her team has also encouraged other student organizations, such as the Interfraternity Council, to enroll, too, Brockman says, but it was KU Athletics that responded right away and made the courses a requirement.

“Kansas Athletics was that first group to step up and say, ‘This is important, and we recognize that and we want to be a part of it,'” Brockman said. ” … They could see the application. They could see the worth and how this would improve the lives of their students.”

The classes are different from what Brockman says are “the norm” at many institutions across the country: those 10- to 20-minute conversations, often squeezed into an already scheduled group meeting, that don’t even scratch the surface of a complex problem. KU’s training will provide evidence-based instruction over four years, giving student-athletes 45 hours of direct education on gender-based violence prevention throughout their academic careers.

Brockman calls the program “groundbreaking,” a reversal of what she refers to as “drive-by education.”

“We like quick and easy fixes, so we think, ‘If I just tell people not to do this bad thing, then they won’t do this bad thing anymore,'” Brockman said. “But that’s not how changing attitudes, behaviors and beliefs works, because the messaging that our students are getting surrounding gender-based violence, they are inundated with daily.”

“And these are negative messages — things that support rape culture and victim blaming,” she says.

The idea that “we could change a lifetime of societal implications in 20 minutes,” she says, “is a ridiculous notion.” But humanity tends to gravitate toward the easiest and most logical solution, Brockman says, even if that solution ultimately solves nothing.

KU’s new program, dubbed the Gender Based Violence Prevention Seminar, will focus on four areas over the course of its four installments: individual, relationships, community and societal. It’s based on the four-level social-ecological model for understanding violence and the potential effects of violence prevention methods.

It will take time, and Internal Review Board-approved research, to determine just how effective the training is, Brockman says. But just seeing the program come to fruition, she says, has been SAPEC’s “dream” since the free-standing center’s founding two and a half years ago.

But the work isn’t SAPEC’s alone, Brockman says. The program will be led by instructors from a variety of departments across the KU campus, she says, and hopefully, as it evolves, will draw nonathletes, as well as those required to take the course.

All of KU is involved in the training, not just SAPEC. And, though it’s mandatory for student-athletes, the class operates completely independently of KU Athletics, Brockman says.

“This is really a campuswide initiative and effort that happens to have roots in SAPEC,” she says.