How moderates lost control of the Kansas GOP, and why they’re unlikely to win it back 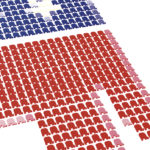 TOPEKA — Anyone who has followed Kansas politics for the last several years knows that the state’s Republican Party is in the solid control of conservatives.

What observers may not recognize is the role sweet and salty treats have played in the takeover.

While races for Congress, governor and other statewide offices will garner the headlines, the battle for the heart and soul of the Kansas Republican Party has long played out in races much farther down the ballot. They are races for precinct committee positions, and they aren’t won with slick commercials or loads of campaign cash. Getting the right people to run is often the key, and the enticements are a bit simpler.

“What we do is, we host some open houses on the Saturdays in late April and May,” Mary Kay Culp, executive director of Kansans for Life said of the group’s efforts to recruit precinct committee candidates in Johnson County. “And we have a notary here at the office, so they can come by and get their forms notarized there.

Because there are thousands of voting precincts throughout the state of Kansas — and each precinct has two committee positions — there are many more positions available than people willing to run for them. Conservatives understand very well that if you can just control the majority of the filled positions, you can control the party.

Those precinct committee people — there are positions set aside for a man and woman in each precinct — get to choose county-level leaders. County level leaders in turn choose congressional district leaders, who choose statewide leaders. Ultimately, they determine which faction will control the party apparatus, who will write the party platform, and more importantly, which candidates will get the most party support in future general elections.

Although hardline conservatives like Sam Brownback and Kris Kobach may be the faces of the Kansas Republican Party, you can argue that the conservative revolution was made possible by a bunch of names that not even the most astute political observers would recognize.

You can also argue that it has become easier for conservatives to win the important precinct committee positions. It is hard to find a moderate group doing the type of recruitment efforts undertaken by Kansans for Life.

“As the parties grow more extreme, it is kind of a Catch-22,” said Rep. Melissa Rooker, a moderate Republican who represents Fairway in the Kansas House and also is a precinct committeewoman. “The folks that take a more reasonable approach to party politics and worry about the growing extremism tend to shy away from these positions. And what happens is, you end up with the most extreme voices populating that basic, foundational structure of the party.”

It is interesting to note that Rooker does not face a primary challenge for her House seat. But both she and her husband — who is a precinct committeeman — are being challenged in their precinct races.

At the precinct level, moderates often are fighting to hang on rather than make gains. That gives you an indication of how long it may be before moderates ever regain control of the Kansas Republican Party. Observers aren’t expecting it to be this year.

“I would say that the 2018 election is not going to bring back some kind of moderate Republican governor,” University of Kansas political scientist Burdett Loomis said in interview. “For one thing, the two most likely nominees, by far, are Kobach and (Gov. Jeff) Colyer, and both of them are pretty far to the right. And I don’t think either one of them will be especially welcoming of moderates, although Colyer might work with them. I can’t even imagine Kobach working with them.”

Even Rep. Don Hineman, R-Dighton, the moderate majority leader in the Kansas House, said he doesn’t see moderates winning back control of the party anytime soon.

“It just takes time,” Hineman said. “Our numbers have expanded pretty dramatically over the last two or three election cycles, and we hope to maintain what we have and continue to build. But it takes time.”

The ‘Summer of Mercy’

Indeed, conservatives have been working on their party takeover for quite awhile.

It is no coincidence that the group handing out cookies, popcorn and notary stamps in Johnson County is Kansans for Life, the state’s largest anti-abortion organization.

Many observers point to 1991 and the “Summer of Mercy” anti-abortion campaign in Wichita as being the catalyst for the split between moderates and conservatives in the GOP. For weeks that summer, thousands of anti-abortion protestors from throughout the country descended on Wichita to engage in sit-in protests and blockades of abortion clinics, particularly the one operated by the late Dr. George Tiller, one of the few physicians in the country who was providing late-term abortions.

That protest led to thousands of arrests. But more importantly, some have argued, it galvanized anti-abortion activists in Kansas and prompted many of them to get directly involved in Republican politics by taking over the party organization. They started with precinct committee positions.

Following the Summer of Mercy, Kansans for Life and other conservative groups started actively recruiting people to run for precinct committee positions, and by 1994, they controlled a majority of seats to elect David Miller, a state lawmaker from Eudora as chairman.

It had taken only three years for the conservatives to take over the top party position in the GOP. It was a sea change, given that the moderate wing of the Republican Party had been in control of the state for at least 20 years.

Robert Bennett, an urbane Johnson County lawyer who was famous for wearing cowboy boots and a cowboy hat, was widely regarded as the boss of the moderate wing of the party. In the early 1970s, Bennett served as president of the Kansas Senate, and was a one-term governor from 1975 to 1979. But many observers credit him with having a profound impact on Republican Party politics all the way through Gov. Mike Hayden’s term in 1991.

But it didn’t take long for that structure to unravel, once conservatives set their sights on the precinct positions.

“It was a pretty sophisticated operation,” Loomis recalled. “I think Thomas Frank details it quite well in ‘What’s the Matter with Kansas?’ And he gives full credit to the anti-abortion activists. They’d work their 40-hour week, and then they’d work 30 or 40 hours more on politics. And certainly control of the party, initially at least, was sort of low-hanging fruit. The moderates didn’t know what hit them.”

But the moderates didn’t retreat with a whimper. Bill Graves, a moderate Republican who held the position of Secretary of State, was elected governor in 1994. But there were other signs that should have worried moderates that year. It was in 1994 that then-Kansas Secretary of Agriculture Sam Brownback was elected to Congress. A conservative, he was swept into office as part of the “Gingrich revolution” when conservative Republicans took control of the U.S. House. Some of the trends that started to show themselves in Kansas in 1991 were hitting the national stage.

Closer to home, 1994 also was the year that conservative Rep. Tim Shallenburger, of Baxter Springs, ousted moderate Rep. Robert Miller, of Wellington, as speaker of the Kansas House. And David Miller, the Eudora lawmaker, was just getting started with his conservative plans as chair of the Republican Party.

Four years later, when Graves ran for re-election, Miller stepped down from his post as party chairman and ran against Graves in the Republican primary. Graves, though, fought back hard. He beat Miller in all 105 counties in the primary election. But Graves didn’t stop there. He started sending out postcards and making other shows of support for moderates. The moderates regained control of the party through precinct races. Mark Parkinson, a Graves ally, was elected state chairman of the party.

Graves again played a role in the 2002 governor’s race. He offered only tepid support to the GOP nominee, Shallenburger, the conservative lawmaker from Baxter Springs. Democrat Kathleen Sebelius ended up winning the race.

Graves, though, left Kansas to become the president and CEO of the American Trucking Associations in 2003. One year later, the conservatives regained control of the party. The defeated Shallenburger was elected as the state party chairman.

In a sign of the times, Parkinson — the moderate who less than 10 years earlier was the chair of the state GOP — became a Democrat to join Sebelius’ administration.

Conservatives have been in solid control of the party ever since.

Moderate Republicans started making a comeback in the 2016 elections, particularly in the House, where the balance of power has shifted to rough parity between moderates and conservatives, although conservatives still have an edge. That resulted in the election of a conservative speaker, Rep. Ron Ryckman, of Olathe, and a moderate majority leader, Hineman, of Dighton.

But if you want to predict the future, it may still be wise to look at the precinct positions. Kelly Arnold, the current state party chair of the GOP, said the precinct positions aren’t just important in determining the structure of the party. They also are critical in helping get out the vote for actual elections.

Hineman, the moderate leader of the House, says moderates are working to get more supporters in the precinct positions, but conservatives certainly haven’t lessened their efforts.

“I know there is quite a bit of work being done in that regard, probably by folks of all political stripes,” Hineman said during a June 1 interview, which was the deadline for precinct candidates to file. “And, I think that is good for the process.”

But finding candidates, especially from a group of people who aren’t extremely engaged in politics, can be difficult.

“I think it’s the most underreported office that is on the ballot, in terms of their significance,” said Rooker, the moderate lawmaker from Fairway. “People don’t understand that the structure of the party, the foundation of it, is the precinct committees.”

Even with those contests, however, Republicans from both camps say it is unlikely that moderates will win back control of the party anytime soon. But Loomis, the political science professor, said not all hope is lost for moderates.

“What’s fascinating about Kansas, and the important story is is that moderates have hung on,” Loomis said. “And that’s really important, because in the end, when you come to a school finance vote, or you come to a ‘return the tax windfall’ vote that we saw recently, you did have that Democrat/moderate-Republican coalition kicking in.”