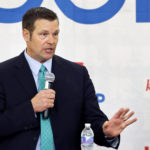 WICHITA — Kansas Secretary of State Kris Kobach has complied with a judge’s order by fully registering thousands of voters whose eligibility to cast a ballot had been in limbo because of the state’s now-defunct proof-of-citizenship requirement, according to court records.

Some 25,000 Kansans will have their voting status solidified ahead of the Aug. 7 primary as a result of the move. Kobach is seeking the Republican nomination for governor in that election, challenging incumbent Jeff Colyer.

According to a report the parties in the case jointly filed Sunday, Kobach told U.S. District Judge Julie Robinson that there are no longer any Kansas registrations in suspense or canceled for lack of citizenship documents. He informed Robinson that he is in full compliance with her order that all registrants receive the same information from county election offices and vote using the same poll books.

Robinson ruled last month that Kansas cannot require documentary proof of U.S. citizenship to register to vote, finding such laws are unconstitutional. The decision struck down the Kansas proof-of-citizenship registration law and made permanent an earlier injunction that had temporarily blocked it.

In her ruling, Robinson cited Kobach’s “well-documented history” of avoiding the court’s orders, noting an earlier opinion finding him in contempt. Her permanent injunction spelled out specific compliance measures he was ordered to follow to implement the decision, such as ensuring all voter notices and websites in all languages make clear voter registration applicants do not need to provide citizenship documents.

The judge further ordered that the parties submit a joint status report 30 days before the Aug. 7 primary election to determine if any modification of its final order is needed or whether any additional steps are necessary to ensure “effective relief for voters is not denied or otherwise undermined” by Kobach.

Her June 18 ruling was a setback for Kobach, who has championed such laws and led President Donald Trump’s now-defunct voter fraud commission. The decision came in two consolidated cases challenging a Kansas voter registration law requiring people to provide documents such as a birth certificate, U.S. passport or naturalization papers.

Although the joint report agreed Kobach has now complied with that ruling, the parties’ positions diverged on the issue of whether Kobach can continue to track citizenship documentation. Kobach’s office has instructed county election officials to continue to record U.S. citizenship documents that are voluntarily provided by applicants.

The voters who brought the lawsuit contend Kobach does not appear to have legal authority to do that, and they argue that continuing to accept and record such documents will confuse people and perpetuate the impression that the proof-of-citizenship law is still in effect.

Kobach countered that his office has instructed county election officials not to ask for documentary proof of citizenship from applicants, but some individuals may still present this information on their own. He argued accepting the documents allows his office to perform an “important prosecutorial and criminal investigative function.”

The Kansas secretary of state’s office has prosecutorial authority over election crimes.