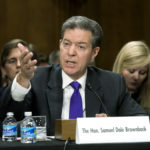 Samuel Brownback, governor of Kansas and a former U.S. senator, appears before the Senate Foreign Relations Committee as the nominee to be the United States Ambassador-at-Large for International Religious Freedom, at the Capitol in Washington, Wednesday, Oct. 4, 2017. (AP Photo/J. Scott Applewhite)

Topeka ? The U.S. Senate is scheduled to take the first of two votes Wednesday afternoon on whether to confirm Republican Gov. Sam Brownback for a diplomatic post in the Trump administration.

Senate Majority Leader Mitch McConnell’s office said in an email to Kansas reporters that the Senate will vote Wednesday afternoon on what’s called a “cloture” motion on his nomination. If that motion passes, it starts a 30-hour clock during which senators can debate the nomination. Unless Senate Democrats agree to an earlier deadline, a final vote on whether to confirm him would occur at the end of that 30-hour window.

If he is confirmed, Brownback would resign the governor’s office and hand over that office to his lieutenant governor, Jeff Colyer.

Aides in the governor’s office, however, told reporters Tuesday that Brownback may not resign immediately after the vote and that, depending on the timing of the final vote, the actual transfer of power may not occur until early next week.

President Donald Trump has nominated Brownback to be U.S. ambassador-at-large for international religious freedom, a post within the State Department that monitors religious oppression in foreign nations around the globe.

Some Senate Democrats have objected to Brownback’s nomination, citing his record on LGBT rights in Kansas.