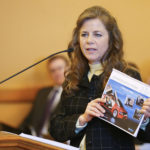 Susan deCourcy of the National Highway Traffic Safety Administration gives a presentation on autonomous vehicles on Tuesday, Jan. 16, 2018, while speaking with the Kansas House Transportation Committee at the Kansas Statehouse in Topeka, Kan. (Chris Neal/The Topeka Capital-Journal via AP)

Topeka ? Kansas lawmakers have begun bracing for the day when fully autonomous vehicles could be driving on city streets and state highways.

Both the House and Senate transportation committees opened two days of hearings Tuesday, taking a look at what state laws may need to change, how such vehicles could affect the economy and, perhaps most importantly, how they would affect the insurance industry.

The hearings began during the same week that the annual Detroit Auto Show was getting underway.That event is where many automakers show new lines of cars, including some that are almost fully autonomous.

In fact, GM has announced plans to begin mass production of fully autonomous vehicles with no steering wheel, pedals or other traditional controls by 2019, according to industry reports. Plans call for them to be sold first to taxi services like Uber and Lyft, but some say they could become available to the general public as soon as 2025.

“I kind of feel like a little Saturday morning when you went from watching the Flintstones to the Jetsons,” Rep. Adam Lusker, D-Frontenac, said during the House panel’s presentation.

“Today’s new technology has proven that automated features can help drivers avoid crashes by warning them that a crash is going to happen, help them brake or help them steer so they can avoid the crash,” DeCourcy told the House committee. “Our goal at NHTSA is to help them usher in the new automated driving system.”

She added that the federal government will largely be responsible for establishing national safety standards for ADS vehicles, but she said it would be up to states, and in some cases local communities, to set standards for how they are licensed and registered and how they can operate on public roadways.

Ted Smith, assistant general counsel in the Division of Vehicles at the Department of Revenue, said they could be a life-changer for the elderly and disabled who can’t safely operate a standard vehicle.

“The idea of autonomous vehicles is a very positive one for us,” he said, “because when we can’t give someone a driver’s license, when we can’t register a motor vehicle, that person in a small way, sometimes in a large way, is cut out from their society or their community.”

But there are also a number of concerns about such vehicles, DeCourcy told both committees, including liability in cases where the vehicles malfunction and cause a crash, as well as cyber security concerns because the vehicles have open communication portals that sense road and traffic conditions as well as communicate with GPS satellite services, portals that could be vulnerable to hacking.

Heather Fleming, who represents State Farm, the state’s largest automobile insurer, said in written testimony that the insurance industry would need to overhaul the way it measures risk for auto insurance, an issue that could have a significant impact on insurance rates.

“Key issues for State Farm and insurers in this public policy discussion relate to our ability to assess risks presented by our customers, to price that risk appropriately, and to handle claims that result from crashes,” she said.

Speaking to the Senate committee, she said automation systems have the potential of reducing the frequency of accidents but could increase the severity of those that do happen if the systems fail.

DeCourcy said NHTSA is encouraging states to take steps such as reviewing all their motor vehicle laws and identifying those that may need to be changed to accommodate driverless vehicles. She said those could include such things as requirements that a driver keep one hand on the steering wheel at all times, or even requirements that all vehicles have a rear view mirror.

But she said the agency strongly discourages states from adopting laws or regulations that could be an impediment to deploying ADS vehicles.

“We really would like to see the state be a technology-neutral environment, not to place unnecessary burdens on any kind of competition or innovation by limiting the Automated Driving System testing or deployment to just motor vehicle manufacturers,” she told the committees. “We’re really looking for innovation here.”