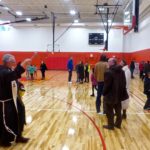 Pastor Jeffrey Ernst blesses the new gym at St. John the Evangelist Catholic Church as parish members check out the new 8,000-square-foot facility on Sunday, Jan. 7, 2018. The gym in the 1200 block of Kentucky Street will serve St. John Parish and School.

St. John the Evangelist Catholic Parish showed off Sunday its $3 million investment in its Kentucky Street campus with an open house to celebrate the completion of a new gymnasium.

Sam Romero, director of stewardship and development for St. John Parish and School, said the 8,000-square-foot gym includes a large curtain that can divide the playing floor in half to accommodate two practices or games, portable bleachers, a catering kitchen that will connect the gym to the coming performing arts center and a glass-enclosed entryway that can double as a reception area.

The project also relocated the parish’s old convent to make room for the new gym. The convent was moved adjacent to the church about a half-block to the south, and it has been remodeled to include such things as church offices, a staff workroom, a 25-person conference room, smaller meeting rooms and a kitchen, Romero said.

In comments at the open house, pastor Jeffrey Ernst said the projects were completed after a successful 2013-2014 capital campaign. The two projects were the second phase of planned upgrades at the parish campus on the 1200 block of Kentucky Street, he said. The first phase built the middle school that opened in 2013.

Work has already started on the third phase, which will convert the old gym into a performing arts and event center, Romero said. That work should be finished this summer, she said.