Healthy Outlook: KU Alzheimer’s center study could change aging as we know it

Research could improve life for seniors, and the generations that depend on them 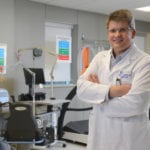 Dr. Jeffrey Burns is shown in the exercise lab at the University of Kansas Alzheimer’s Disease Center. Burns, co-director of the center, is a co-principal investigator on a study called IGNITE, or Investigating Gains in Neurocognition in an Intervention Trial of Exercise.

He’s biked through the mountains of Las Cruces, N.M., 5 miles every morning, for most of his senior years. He’s always had rock-solid six-pack abs — and his mind has stayed equally firm.

He is exemplary of a theory that a University of Kansas Alzheimer’s Disease Center research group has set out to prove: Exercise has a strong, positive impact on brain health, and it slows the loss of cognitive function that comes with age.

Dr. Jeffrey Burns, co-director of the center and a co-principal investigator on the study, said this would be the largest study of its kind to date.

“There are a lot of smaller studies that show evidence or support the idea that exercise impacts the brain in a positive way, but studies haven’t been big enough yet to really definitively prove it,” he said.

Most of the studies that have been done, Burns said, don’t hold up to rigorous review.

“Most of our data on exercise and the brain comes from observational studies or big population-based studies. They’re not randomized trials, so it makes it hard to know what’s causing what,” he said. “A randomized trial is really the only way to prove that an intervention is impacting your outcome.”

There are two major differences with this study — called IGNITE, or Investigating Gains in Neurocognition in an Intervention Trial of Exercise — from what’s already been done. First, its sample size of 640 individuals will be much larger than any previous studies that include MRI brain scans.

Second, those 640 — volunteers from the areas of Kansas City, Boston and Pittsburgh between ages 65 and 80, whose current lifestyles are “underactive” — will be split into three groups, randomly prescribed a level of exercise and activity, and monitored by trainers.

Each participant in the study will be tested to get a baseline, “looking at everything from memory and thinking testing performance to changes on brain scans and a lot of things in between,” Burns said.

Then they will participate in a full year of one of three prescribed “doses” of exercise. One group will do only anaerobic exercises such as stretching and toning. The other two will do moderate-activity exercises such as biking or walking, but one group will do 150 minutes per week and the other 225. This will help researchers better understand the optimal amount of exercise for brain health.

“We think the aerobic exercise is what will be associated with greater benefits to cognition and brain structure,” Burns said, and he noted that a similar study of 100 people yielded evidence that “more is better.”

At the conclusion of the year, participants will repeat the same tests they took before they began exercising. There are no drugs involved.

Burns said there are currently drugs in testing phases, but even if one could be proven to treat or prevent Alzheimer’s disease, changes in diet and exercise would likely still play a large role in preventing or delaying the onset of cognitive problems.

“If you think about cardiology, the field of cardiology is a combination of drugs and lifestyle. It’s really had a big impact in the last 30, 40 years on public health,” Burns said. “I see us as being where cardiology was 30 or 40 years ago in terms of understanding what is the role of lifestyle.”

Burns also said exercise has many advantages over drugs — for people of all ages.

“There are so many benefits to exercise beyond what we think is going to happen in terms of brain benefits,” he said. “There are mental health benefits; people feel better; there are lower depression and anxiety symptoms; it’s good for the heart and lungs. There are a lot of other benefits we get from exercise that we may not get from drugs.”

The researchers are actively recruiting participants. Trainers will only be available at Kansas City-area YMCAs, but interested individuals can apply by visiting kualzheimer.org and clicking “Join a Study,” or by emailing kuamp@kumc.edu. Results will take a few years to gather and analyze.

This study is one I personally believe is long overdue.

I have had the good fortune of watching my grandfather age bravely and with dignity. I will forever cherish my childhood memories of climbing to the tops of mountains with him, even as those in the generation between us grew tired and headed back to the car long before they reached the peaks. I want more people to have those kinds of memories with their grandparents.

This KU study could provide evidence that scientists worldwide will appreciate, and the medical community could finally embrace exercise for its value beyond the clear physical benefits we’ve all known and accepted for years. If that happens, I believe more young generations will get to enjoy that meaningful connection. That wisdom and those memories can be imparted only by their eldest elders — and only if they live long enough and stay sharp enough to share the experience vividly. 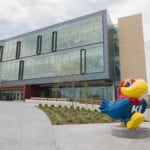