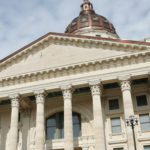 Topeka ? Homeowners and businesses in Kansas may soon be asked to pay significantly higher property taxes in the future as part of any state plan to pay for a court-mandated increase in K-12 education spending.

Rep. Steven Johnson, R-Assaria, who chairs the House Taxation Committee, said recently that he intended to make that part of the discussion in the coming weeks as lawmakers begin working in earnest to find ways to pay for what could be a $600 million increase in annual aid to public schools.

Last week, Johnson introduced a bill in the tax committee that would nearly double the mandatory statewide property tax levy that goes to public schools. It’s a proposal he said he is not necessarily endorsing, but one that he thinks lawmakers at least need to talk about as the discussion about a school funding fix moves forward.

“I don’t know that this will be part of the solution, but the discussion about what our priorities are is the key part of getting to what the collective will of the people of Kansas is,” he said. “I would even guess that most first tax bills would have a difficult time of surviving.”

The statewide levy is currently set at 20 mills, or $184 in tax on a home valued at $100,000. That does not include additional property taxes levied by individual districts for local option budgets, capital outlay and debt financing.

Each of those incremental increases would be expected to generate an additional $200 million in revenue for schools, Johnson said, for a total of $600 million phased in over three years.

Kansas began levying a statewide tax for schools in 1992 as part of a landmark overhaul of school funding that gave the state the central role in funding all public schools. Prior to that, when individual districts largely determined their own funding, school levies ranged from a low of 9.2 mills, in the Burlington district, to a high of nearly 98 mills, in Parsons.

That disparity was at the heart of an earlier school finance lawsuit, which prompted the 1992 overhaul.

A few years later, during the administration of then-Gov. Bill Graves, a Republican, the state began slashing that mill levy amid a period of economic expansion that sparked rapid growth in state sales and income taxes, brought on largely by the boom in the technology industry in the late 1990s.

In the years since, however, the national economy has gone through two significant recessions, both of which had significant impacts on the flow of revenue into state coffers. Those recessions were followed by a major shift in state tax policy during former Gov. Sam Brownback’s administration, when income tax rates were slashed across the board.

Now Kansas is under a state Supreme Court mandate to increase funding for public schools, funding that many argue has not kept pace with rising costs since the start of the Great Recession in 2008 and 2009.

Still, there are some in the Legislature who remain opposed to the idea of returning to a system of increased reliance on property taxes to fund schools.

“Dead on arrival” is how House Democratic Leader Jim Ward, of Wichita, who is now a candidate for governor, described the plan during a recent news conference.

“The most unpopular tax, the most unfair tax, the most wrong-headed way to fund schools is based on property,” he said. “And we know that because that’s the way we did it in the ’70s and ’80s, and it resulted in the first lawsuit. It’s the absolute wrong thing to do.”

A number of Democrats, including Sen. Tom Holland, of Baldwin City, have been openly talking about raising state income taxes even further for those at the upper end of the income scale.

Rep. Tim Hodge, D-North Newton, has even introduced a bill that would raise the top marginal tax rate to 10 percent on income in excess of $500,000 a year for an individual or $1 million a year for a married couple.

Republican leaders in the House and Senate, however, have said so far that they have no interest in considering another income tax hike this year.

Meanwhile, the estimate of a $600 million price tag for fixing the school funding system is still only just that, an estimate, based largely on what the Kansas State Board of Education has said it needs to achieve the educational outcomes that the Supreme Court has set as the standard for adequate funding.

By mid-March, a consultant hired by the Legislature is expected to produce a new study estimating how much it will cost to meet the court’s standards.

The court, in turn, has set a deadline of March 30 for the state to submit briefs detailing what actions lawmakers have taken by that point to address the court’s concerns.

The court has indicated that it is prepared to close public schools on July 1, at the start of the new fiscal year, if lawmakers fail to adopt a constitutional school funding system.