Grass vs. artificial turf: Despite cost issue, Lawrence school board chooses to go with turf again 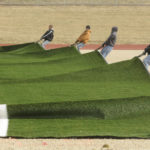 In this file photo from Jan. 6, 2009, artificial turf is installed at the Free State High School football field.

The Lawrence school board on Monday approved $4.57 million to replace artificial turf at eight high school fields, but board members also were told they should expect the new turf to last longer than the last batch.

The board approved the recommendation of Kyle Hayden, district chief operations officer, and Tony Barron, district executive director of facilities and operations, to approve a lease-purchase contract with Hellas Construction to install the fields. The agreement is contingent on the district securing financing for the fields. Once financing is in place, the new turf will be installed this summer on the football, soccer, baseball and softball fields at both Lawrence High and Free State.

The current synthetic fields were installed in 2009 and their warranties expired last year. Barron wrote in a report to the board that the fields have multiple wear issues and have damage beyond repair in high-traffic areas.

Barron said Monday that the new fields also would have an eight-year warranty, but the district would look to get more years out of the replacement fields.

The durability of the fields has improved in the past decade, Barron said. The contract also includes yearly cleaning and maintenance, which should prolong the life of the fields, he said.

Barron said it would cost $122,244 a year in labor and supplies to maintain the eight fields if they were natural grass. However, the district also would have to maintain eight practice fields should it opt for grass fields, he said.

The district allows daily public access to the football and soccer fields, said school board President Shannon Kimball. She said Hayden made 17 visits to other school districts before making the recommendation and found it very rare for districts to allow open access.

“One of the community benefits of those fields is public access,” she said. “We don’t gate them off or lock them. Based on the visits our staff made, that is almost unheard of. If we went back to grass fields, we couldn’t allow the public to use them because they couldn’t handle the high traffic.”

• Received an update from Leah Wisdom, assistant director of equity and student services, on the district’s Advancement Via Individual Determination program, which makes available an elective course to students with D, C and B grade-point averages who have average to high reading and math test scores. Its curriculum focuses on skills and behaviors that contribute to success. The course is aimed at minority or low-income students who may be the first in their families to attend college, she said.

• Approved a four-year lease of laptops for district teachers through Apple Financial Services Education Finance. The lease’s annual cost of principal and interest will be $362,678 for a four-year total of $1.45 million. The new laptops would replace those acquired in a four-year lease in 2014 and take advantage of those devices’ trade-in value.

• Approved the purchase of equipment for the Lawrence College and Career Center Culinary Kitchen at a cost of $111,000, to be funded through the district’s 2017 $87 million bond issue.