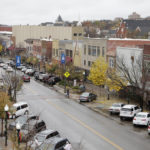 When it comes to the future of downtown Lawrence, city leaders want to make sure its character is given due consideration.

The Lawrence City Commission is taking the first steps toward the creation of a new downtown master plan, which will replace guidelines that have not been updated in 20 years. At its meeting this week, the commission authorized city staff to create a request to solicit proposals from consultants.

The consulting firm selected will conduct a study of issues important to downtown and will then draw up a master plan based on the study’s results. In addition to more general development-related issues, commissioners said they’d like consultants to study local businesses, public safety and affordable housing.

Commissioner Leslie Soden said she wants consultants to examine how the city can specifically encourage small businesses and local ownership downtown and make sure that mom-and-pop businesses don’t get priced out. Soden later told the Journal-World she thinks those businesses are important to the culture and uniqueness of Lawrence.

“How can we specifically encourage small business and local ownership to thrive downtown?” Soden said. “I don’t want to see downtown just become a long strip of chain stores. I think that Lawrence has its own unique vibe and that the different kinds of stores that we have downtown contribute to that.”

Assistant Director of Planning Amy Miller told the commission that a multidisciplinary group of city staff has been working on the draft of the request for proposals. Miller said that the desire is to create a plan that recognizes the existing sustainable nature of downtown and also incorporates input from stakeholders and the community.

The draft request for proposals includes various broad considerations, which city staff said will be refined under the first phase of the study. Those considerations include identifying needed and desirable assets, existing infrastructure and uses, and potential obstacles related to economic growth. Following Soden’s suggestion, the commission agreed that consultants should consider the mix of national and local businesses.

The commission also agreed to add public safety and housing to the study. Mayor Stuart Boley said that while there are already some residential uses downtown, there may be an opportunity for more, including more affordable housing.

Soden suggested that the study include public safety, which she told the Journal-World is a topic that comes up a lot in her conversations with residents. Specifically, Soden said she is interested in the possibility of adding cameras downtown, increasing police presence and addressing transients and panhandling. Soden said making sure people feel safe downtown is vital.

The need for a downtown master plan was identified in the City Commission’s strategic plan. City planners previously told the Journal-World that the plan will set guidelines for downtown that could also prompt new policies and changes to city code. Other topics that commissioners have said they want the plan to address are buildings heights and parking requirements for new downtown developments.

The city has budgeted $110,000 for the plan. Miller said the selected consultant could start work in April and a completed plan could go before the commission for consideration during the fall of 2018.