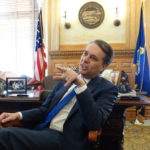 During his first full day on the job, Gov. Jeff Colyer speaks with reporters, saying he intends to announce some major personnel and policy changes in the coming days.

TOPEKA ? Kansas Gov. Jeff Colyer is likely to stick closely to some of former Gov. Sam Brownback’s most prominent policies in spite of promising a “new day” when taking office this week,

Colyer, like Brownback a conservative Republican, was sworn in Wednesday after Brownback resigned to become U.S. ambassador-at-large for international religious freedom in President Donald J. Trump’s administration. Before that, Colyer was Brownback’s loyal lieutenant governor for seven years.

Colyer on Friday made a quick change by appointing a state House member as his budget director and has sent signals he wants to repair his predecessor’s sometimes-ragged relationship with lawmakers. He said he’ll offer new rules next week for dealing with sexual harassment in state government and release a proposal for government transparency — both issues on which Brownback was largely silent.

Here are issues where Colyer is likely to retain Brownback positions.

Brownback left office touting the numerous abortion restrictions he signed into law as governor, including a first-in-the-nation ban in 2015 on a common second-trimester procedure that remains on hold because of a state court challenge.

Kansas last year imposed a requirement that clinics identify their doctors for patients and provide information about them — specifically in 12-point Times New Roman type on white paper.

In his inaugural speech, Colyer drew applause by using language common in the anti-abortion movement, declaring, “I believe every life is sacred.” All indications are that he will sign whatever legislators pass in the way of new abortion restrictions or rules for providers.

Under laws enacted during Brownback’s tenure, Kansas allows gun owners to carry their weapons concealed without a state permit at age 21 and requires state universities to allow concealed carry on their campuses.

The only significant loss for gun-rights groups came last year, when Brownback allowed a bill meant to keep concealed weapons out of public hospitals to become law without his signature. It had strong support from the University of Kansas Health System.

While some lawmakers would like to tighten gun laws and keep concealed weapons off campuses, the House passed a bill this week to allow 18-, 19- and 20-year-olds to carry concealed weapons if they obtain a state permit.

Colyer said he would review whatever lawmakers pass.

But he also told reporters Thursday during a news conference: “I’m a Second Amendment guy. On that, it’s a basic, fundamental right for us.”

Colyer on Thursday defended the philosophy behind work requirements for social services programs, arguing that people are both physically and mentally healthier when they hold jobs.

Under Brownback, the state tightened its rules for cash assistance, imposing a work requirement and lowering the state’s lifetime cap on benefits. Supporters argued that they moved people to work from welfare and promoted self-sufficiency, while critics said they hurt poor families. Legislators don’t appear likely to consider changes this year.

Like Brownback, Colyer has been a vocal critic of the federal Affordable Care Act enacted in 2010 and championed by former President Barack Obama, a Democrat. He opposed expanding the state’s Medicaid health coverage — as encouraged by that law — to as many as 180,000 more adults.

Trump’s willingness to allow states to impose work requirements for their Medicaid programs gave some backers of expanding Medicaid in Kansas hope last month that they could pick up more support from previously reluctant Republican lawmakers.

But Colyer said during an AP interview that he still had concerns about the potential cost to the state and suggested that expanding Medicaid put a priority on helping able-bodied adults over the disabled. He and Brownback have long made those anti-expansion arguments.

Colyer and legislators face a Kansas Supreme Court mandate to increase spending on public schools. Before leaving office, Brownback proposed phasing in a $513 million increase over five years and relying only revenue growth to pay for it.

The plan angered fellow Republicans, who thought it was irresponsible and set up false expectations.

But Brownback also said the money should be tied to efforts to boost the state’s high school graduation rate, to increase teachers’ pay and to ensure that more graduates pursue college, technical training or the military.

Since becoming governor, Colyer has expressed support for those goals.

As for the proposed increase in education funding, Colyer said after his swearing in that he could live with it but had to consider the health of the entire budget.